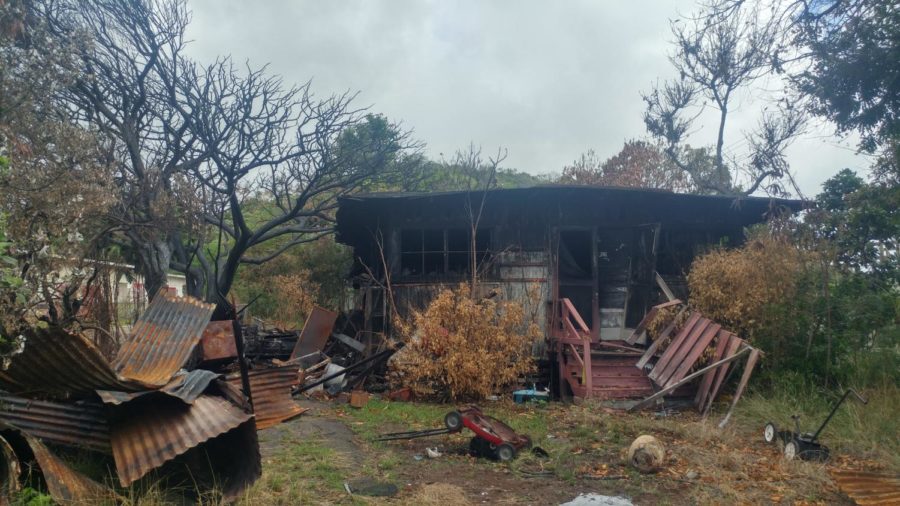 A fire broke out in an old custodial house on the southeastern edge of campus on Nov.15 around 3 p.m. It caught the immediate attention of students and faculty. Many of the sports practices that were happening at the time were stopped due to this house fire.

Shortly after the house fire began, several fire trucks and police officers arrived to ease the situation. With the fire raging during the beginning of rush hour, traffic was horrendous on Kalanianaole Highway. Only one lane was open westbound while all lanes remained opened eastbound, but turning off Kalanianaole on the mauka side was restricted up until the end of the Waialae Iki Park.

The two-alarm fire was contained within 30 minutes by 40 firefighters due to the immediate and excellent responses of the Honolulu Fire Department.

“There are always hazards that we face, possible things that could injure us,” said Chief Brett Mau Acting Battalion of the Honolulu Fire Department.

The smoke from the fire made driving on Kalanianaole Highway difficult. Burgin’s step-son commenting after what felt like an explosion “rattled cars.”

“My stepson said, ‘Aunty, I felt that,'” said Beth Burgin. “You could feel it like maybe a propane tank or a hot water heater.” The house fire was allegedly started by a few students who were playing with fireworks who thought they had put out the fire. The fire re-caught after they left, which eventually lead to the whole house catching on fire.

“It was a group of kids but apparently he started the fire.” Said a Junior at Kalani. “I think they were just [messing] around. It wasn’t on purpose they tried to put it out but apparently, they didn’t do it well enough so it recaught (sic) after they ran away.”

There have been murmurs around Kalani about who did it. One rumor even says a student was charged with second-degree arson. But neither the Honolulu Fire Department nor the Honolulu Police Department could confirm these rumors when asked by Ka Leo staff.