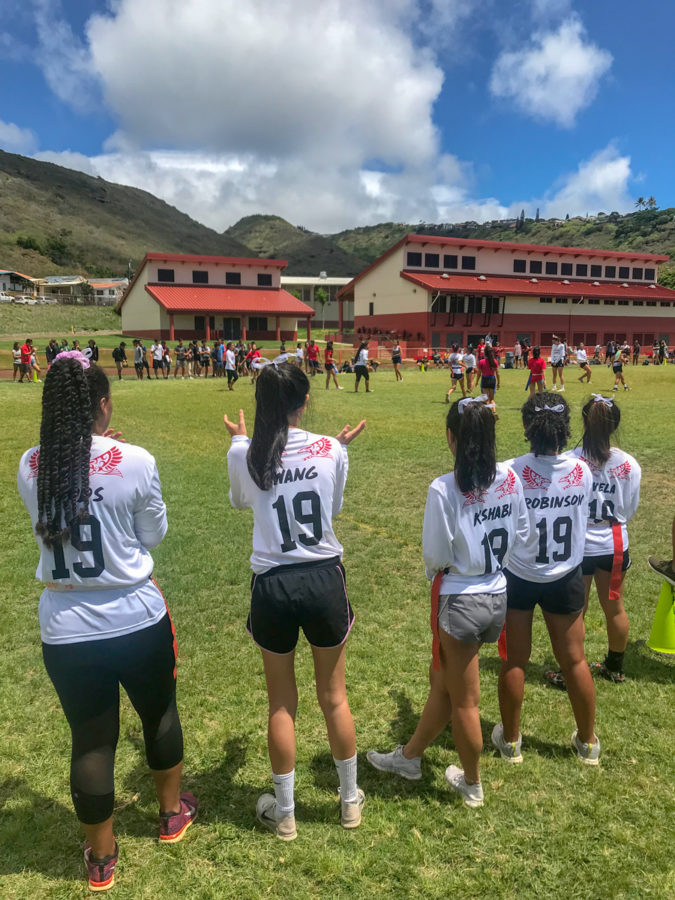 The third annual Powder Puff games were played throughout Homecoming Week at Kalani High School. Preliminary games were held on Tuesday, Sept. 11 and Thursday, Sept. 13. The Seniors defeated the Juniors with a score of 14-7 in the championship game on Sept.14, naming the class of 2019 back-to-back champions.

On the first day, Freshmen played Seniors and Sophomores played Juniors. The Seniors and Juniors both won by single touchdowns.

The consolation game was held two days later on Sept. 13, where Freshmen defeated the Sophomores for third place with a score of  21-7.

Sophomore Nyree Valdez made her first appearance in a Powder Puff game on Tuesday. Going into the game, Valdez had a mindset of being “humbled and focused.” She wanted to stay calm during the game.

Freshmen struck first by scoring a touchdown within the first two minutes of play when Christen Horita (9) caught a pass in the end zone.

However, the score got to Valdez, causing regret.

Even though the Freshmen didnʻt win, Horita is pleased with the outcome.

“Iʻm just glad we got third place instead of last,” she said.

“I probably should have been more confident,” Miyashiro said on behalf of the Junior team.

Aiya Souphilavong (12) made the first catch of the game with the assist from quarterback Ariel Wang (12), causing the crowd to get “pumped,” according to spectator Keoni Thiim.

“I had to tune it out, to be honest. I was just so focused on catching the ball,” Souphilavong said of the crowd.

The class of 2019 once again made Powder Puff history at Kalani High School by being the first class to be back-to-back Powder Puff champions.