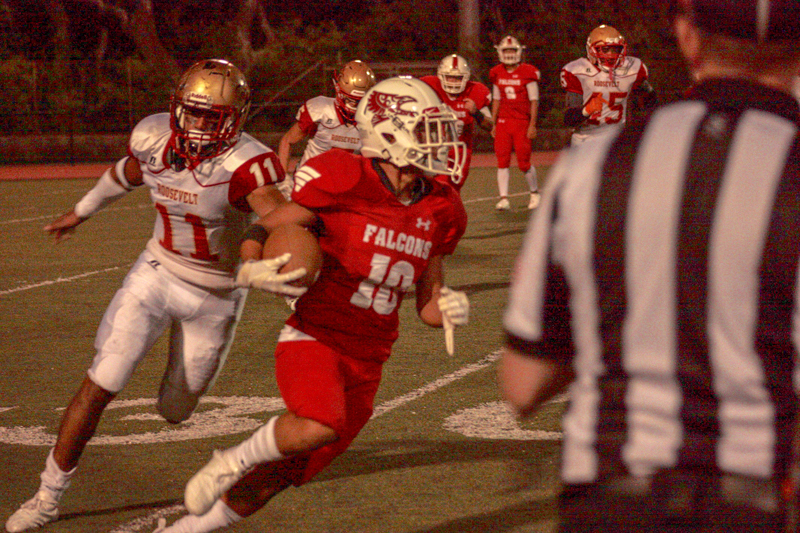 Receiver Brayden Miguel carries the ball up the field on the play against Roosevelt Friday, Aug. 31. Photo by Cassandra Zayas 2018.

Kalani gets their first win of the season over McKinley, 22-16 on Homecoming night bringing their record to 1-5. The Kalani defense held McKinley to only two rushing touchdowns, keeping them scoreless for both the second and third quarter.

Before the game energy on both sides was high. Javan Montiho, one of Kalani’s captains talked about how much this game meant to the players.

“We don’t want to let this school down. We’re already 0-5. We just want to come away with a dub[Win],” Montiho said. “We need this win to make playoffs.”

Despite strong energy from the crowd and a serious desire from the team’s’ leaders, the Falcons started their first play of the drive with a near 20-yard fumble, forcing them to eventually punt away the ball and giving the Tigers excellent field position. The Tigers took advantage and went up 8-0 at the start of the first quarter.

While trying to mount an offensive drive, a devastating injury occurred that postponed the game over 25 minutes, with the player unable to move until an ambulance arrived. Kalani’s Jake Lee #10 dislocated his hip while trying to make a play. This freak injury would coincidentally spark the team and its players.

Coach Scott Melemai weighed in on the injury after the game.

“I think what we see is after something like Jake happening, and the crowd and everything happening, they realize a sense of urgency, that they need to work hard and get things going,” Coach Melemai said.