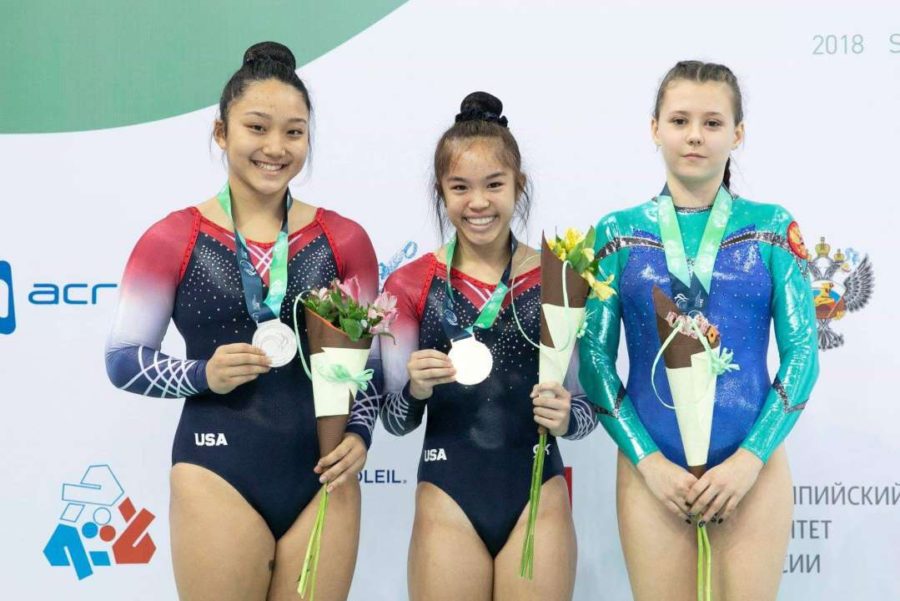 Kayttie Nakamura (center) won a world championship in the double mini-competition at this year’s World Age Group Competition (WAGC) in St. Petersburg, Russia Nov. 11-16. To her right is U.S. teammate Sydney Senter, who placed 2nd in the Double Mini, and to her left is Russian Elizabeta Galtsova, who earned 3rd place. Photo courtesy of K. Nakamura 2018.

Kayttie Nakamura attends Kalani High School and is a Commissioner for the Class of 2020. She also has a 4.1-grade point average and a full class-load that includes AP English.

And she’s a World Champion.

“It feels very surreal,” she said. “I feel very satisfied with the results because it’s been something that I have been working towards for years and never thought would happen. For it to finally become a reality is just a dream come true.”

She has been competing in WAGC for the past three years and has never placed higher than fourth. This year, she used her previous performances as motivation to win.

“Every year I got fourth place for the same event and it was incredibly frustrating,” Nakamura said.  “Last year, I only missed the medal by one-tenth, so going into this season, making the U.S. team and medaling was my number one goal.”

Sydney Senter is Nakamuraʻs best friend and has been one of her teammates for the past seven years. Senter claims she always knew Nakamura was capable of winning a world championship title.

“She was unlucky for the past few years missing the medal by one place, but I knew her time would come,” Senter said. “She was really nervous about medalling going into this competition, but I knew that she’d do it.”

This year, Nakamura felt a lot of emotions entering the WAGC.

“Going into the competition I was very overwhelmed and stressed because I was worried about how my performances were going to be,” Nakamura said. “After I finished, I felt like I was finally able to relax and have fun. But at the same time, I made sure that I reflected on and analyzed my performances so that I could figure out how to improve for next season.”

Nakamura had to take advantage of her competitorʻs mistake in order to claim the World Championship title.

“The Russian was winning and I was in second place after everyone performed their first routine,” she said. “She made a mistake on her last routine, so it was my chance to make up points and try to earn a medal.”

Nani Vercruyssen has been coaching trampolinists for 13 years and has been Nakamuraʻs assistant coach for six. She thinks Nakamura is unique because, from a young age, she has been performing higher difficulty skills on the double mini.

“I am overjoyed and so proud of what she has achieved,” Vercruyssen said. “Especially after overcoming chronic injuries this season.”

Even with all of her success, Nakamura had multiple obstacles she had to deal with while competing.

“I had shin splints, SI joint pain, and knee pain,” Nakamura said. “I went to physical therapy to rehabilitate some of my injuries, but I mostly had to deal with the pain during practices and competitions because there was no time in the season to take a break.”

She started to compete in trampoline at the age of eight because her parents wanted her to try another sport besides soccer.

“It was more fun than soccer, for sure,” Nakamura said. “I like the fact that it’s so unique from every other sport. It’s not every day you see people doing death-defying tricks on a trampoline or trying to stick a landing coming out of a difficult flip on a mat.”

According to Nakamura, hard work and long, 15-hour practice-weeks are the reasons for her success.

“I didnʻt have as much natural talent as the other girls that did the sport, so I had to work a little harder than them to be at the level I wanted to be at,” she said.

The world champion is proud of her title and remains humble.

“Winning hasn’t really affected me,” she added. “I’m still the same person that I was before I left for Russia.”

Now that Nakamuraʻs longtime goal has been checked off, she already has a new one in mind.

“Next year I am trying to make the World Championships team and compete for a spot at the Olympics for our country,” Nakamura said. “If our country is able to earn the spot, then I am going to try to earn the individual spot for the 2020 Olympics in Tokyo.”