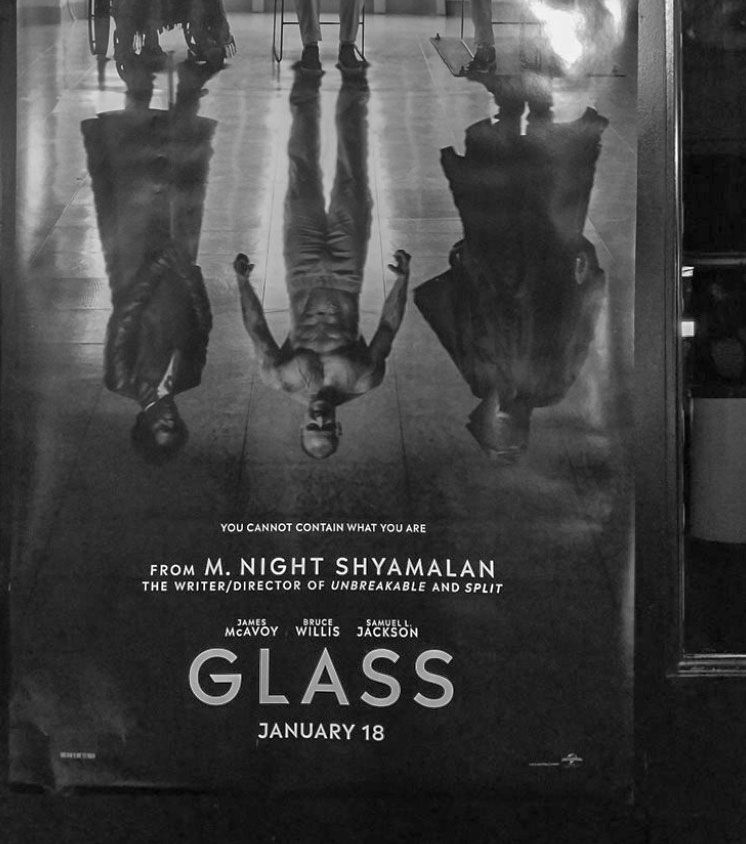 GLASS, M.Night Shyamalan’s sequel to SPLIT and threequel to UNBREAKABLE ( released 19 years ago) recently hit theatres, and for Shyamalan fans, the movie didn’t disappoint. For those who haven’t seen the amazingness that is UNBREAKABLE and SPLIT, I will describe them so uhh you know spoilers. UNBREAKABLE is about a man who slowly realizes he has superpowers just like those out of a comic book. That man’s name is David Dunn (Bruce Willis). Dunn is in a train wreck that kills everyone except him, which brings the attention of Elijah Price (Samuel L. Jackson). Price, who is so brittle-boned that when he came out of the womb his arms and legs were broken, believes that Dunn is a real superhero.

Price leaves Dunn a note on his windshield “How many days of your life have you been sick?” Up until he meets Price, Dunn hasn’t given any real thought to his powers or to the fact that he’s never been hurt or sick.

One day, Dunn, security personnel at a college stadium, bumps into a man and gets a vision of the man holding a gun shooting people at the stadium. Just as that happens, another security guard comes up to Dunn and says that there’s a man waiting for him. He goes to tell the security guard to search every person who comes in, which scares the man with the gun. When David goes to meet the man who the other guard told him about he realizes that it’s Price. Soon after, Dunn learns that the train crash that proved he has powers was caused by Price because he wanted to find the person who is the opposite to him the man who is UNBREAKABLE. More events ensue, including Price getting arrested, but the main thing is that Dunn learns he has super strength and prophetic visions and that he can’t get hurt unless water is involved.

SPLIT is a great movie about Kevin Wendell Crumb and his 23 personalities (the Horde) and Casey, the sole survivor of Crumb’s assaults. Split shows Crumb and his 23 personalities, but more importantly, it shows the slow but eventual takeover of Crumb’s mind and formation of THE HORDE and the new and emerging 24th personality called THE BEAST. The movie centralizes on three of his personalities: Dennis, Patricia, and Hedwig. Dennis kidnaps three girls and locks them in a room and keeps them there until THE BEAST emerges. One by one the three girls are taken to separate rooms until Casey is the only girl left in the original room. While all of this is occurring, Casey is recalling memories of her dad who would take her hunting with her uncle. The only thing is that her uncle is a total creep and he likes her to play “animal” with him. After Casey’s father dies she goes to live with her uncle who then rapes her as she gets older. With the skills she acquired from her father’s hunting lessons, Casey frees herself from the room THE HORDE is keeping her in and sets out to find the other girls. Once she locates them, one is already dead, and she witnesses the other being eaten alive by THE BEAST. When THE BEAST chases her and sees the scars and cuts she has on her body, he deems her pure and untainted and lets her live.

Taking place a few years after SPLIT, THE BEAST is still kidnapping girls and killing them so he can show the world he is a stronger version of human. This brings the attention of THE GREEN GUARDIAN or is it THE PROTECTOR? Ohhh no, I remember it’s THE TIPTOE MAN!!! Anyway, Dunn (THE GREEN GUARDIAN) with help from his son, narrows down the area where THE HORDE could be taking the girls who are being kidnapped. Once Dunn bumps into Hedwig, he has a vision of the surrounding area and decides to save the girls instead of heading after Hedwig.

This is it, the first big showdown between THE BEAST  and THE GREEN GUARDIAN.

As events transpire, Dunn and Patricia are taken to a mental hospital. When they get there, Dunn comes face-to-face with an old friend-turned-adversary  Elijah Price or as he prefers “first name Mister, last name Glass.”

This is when they meet Dr. Ellie Staple, and she sets out on the trail to convince the three men that they aren’t, in fact, superheroes or have powers, but instead just regular people.

During this process, Price learns that he’s responsible for creating THE BEAST. He unintentionally did this when he caused the train crash that killed everyone including Kevin’s father. This lead to Kevin living with his abusive mother who beat him and Kevin creating his numerous personalities and eventually… THE BEAST. Mr. Glass keeps this information to himself at first only because he plans to torment the world with his main weapon: THE BEAST. As events play out, things happen but, you know, spoilers… So watch the movie.

GLASS is a phenomenal movie – and while the first 2 hours is entertaining, the last 20 minutes (in my humble opinion) are completely unsatisfying. Shyamalan has been celebrated for his twisty and creepy stories, but towards the end of Glass, it seems like he put the ending in just to say “I don’t want to make another movie set in this movieverse” (movie universe).

Like I said earlier, this movie is excellent in my opinion, it’s just the ending kinda weighs it down. McAvoy, Willis and Jackson all play their characters with strength and comic-book cliché, which only makes the movie that much more entertaining. Willis is a middle-aged superhero who can bench press a tonne. Jackson is an evil mastermind who in comic books of old would be wearing a monocle and top hat. And McAvoy, with his shirt-ripping, building-hopping rage, brings the Beast to life, while also innocently portraying Hedwig, a nine-year-old boy.

Even though this is the threequel, I found myself craving a Glass-sequel even though there’s very little chance a sequel will come out. GLASS should’ve shattered the box office reviews – instead it was gifted with mediocre Movie-Goer review and horrible critic reviews.