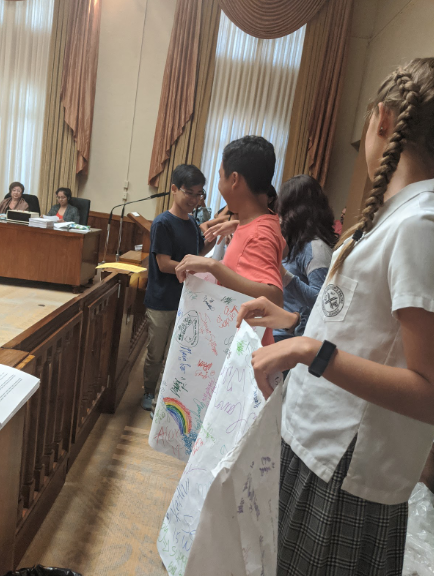 Over 15 students from across the island showed up at Honolulu Hale on Nov.14 to support Bill 40. The students gathered hundreds of signatures from classmates to create the over 60-foot-long document they refer to as “The Scroll” and presented it at the hearing. Wilson Tran, a Junior at Kalani High School and head of Kalani’s Green Team believes the students' efforts were successful. “It was more than just that, and the poster exemplified this," he said. "It was a showing of powerful youth support and just how much influence people can have in large numbers. It was a check on our city officials for one thing, but in the bigger picture it was saying that we want a future.” Photo by Lucy Fagan 2019.

On Thursday, Nov. 14 dozens showed up at Honolulu Hale both in support of and opposition to Bill 40, which passed the second-to-last hearing by a 3-2 vote. The bill proposes a phase-out of single-use plastic and polystyrene on Oahu.

Bill 40, which the Council Public Safety and Welfare Committee passed two weeks ago, outlines three steps to phrase out certain plastics. The current wording requires restaurants to only provide service ware items like straws, utensils, stirrers and upon request and bans plastic bags for take-out items by July 1, 2020. The next phase of the legislation bans all polystyrene in restaurant items and requires single-use plastic service ware items to be replaced with alternatives by Jan. 1st, 2021. The final step bans all single-use non-biodegradable plastics in to-go containers, utensils, and beverage containers by Jan. 1, 2022.

The initial language of the bill was criticized by people on both sides of the issue.

Ari Patz has worked since 2007 to lobby for and pass stricter environmental legislation and agrees the first stage of the bill was unclear.

“I think the original bill was written targeting a few different items and then the bill was expanded on and I think the issue was the councilmen who were associated with it expanded on it thinking they were doing something feasible,” Patz shared. “They just didn’t understand the food industry as well as they could have. ”

Much of the opposition to Bill 40 came from small businesses and restaurant owners who believed the switch would cause unsustainable economic stress. The bill has since been amended and clarified into the current Bill 40, which has eased some of the tensions.

Kevin Yim, vice president of marketing and communications for Zippys Restaurants, stated that Zippys would support Bill 40 at this time as long as no other amendments are added at the final hearing on Dec. 4.

Zippy’s also supported the very first version of Bill 40 but not the “undemocratic” additions that took place without consideration for the industry. The local chain was one of the several businesses that attended the rally opposing Bill 40 on Nov. 5.

“Zippys has embraced the idea of being eco-friendly,” Yim stated.

The company eliminated polystyrene bowls ten years ago and has been working continuously to find alternatives for other plastic items.

“It’s going to take some time for us to find the right alternative,” Yim explained. “Not every piece of environmental product is perfect.”

Yim highlighted how a lot of biodegradable alternatives will not be efficient because Hawaii does not have the needed composting facilities to support the decomposition of eco-friendly goods.

“The industry wants to be a part of the solution and wants a seat at the table,’ Yim said. “We are not the enemy.”

Fears have been diminished by clearer language protecting items like shelf-stable foods. Businesses can also file for exemptions if they prove “undue hardship” will result from Bill 40, according to the language of Bill 40 CD-1.

Schools would not be affected directly, according to Joey Manahan, the councilman who introduced the bill, but they could see an effect down the line from distributors. Healthcare facilities such as hospitals would not be impacted due to medical concerns. Mainland companies would also not be affected due to the city and county’s lack of jurisdiction on interstate commerce.

Another fear among business owners is the cost of biodegradable goods, but Patz and other proponents of Bill 40 explain that phasing out plastic will save businesses money on throw-away items.

“It will also encourage a social change to bring your own or use your own instead of relying on that disposable fork, knife, or spoon,” Patz stated.

One alteration Yim says that could improve Bill 40 would be making it a statewide initiative so that regulations across the islands would be uniform.