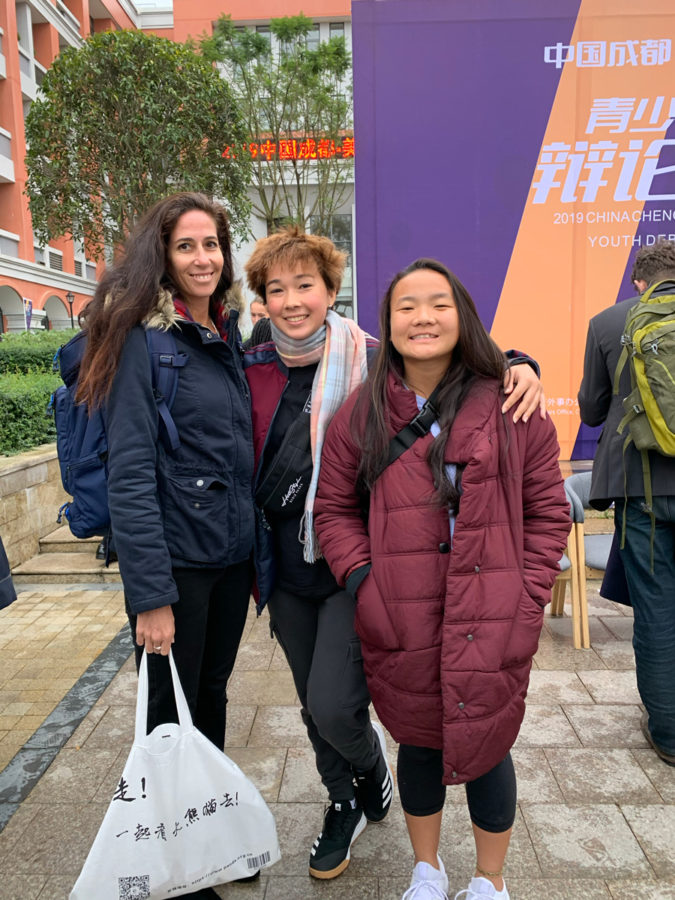 The purpose of the week-long trip, culminating in a two-day debate at a local middle school, was to encourage cultural and educational communication between Chengdu’s sister cities and to provide Chinese and American youth opportunities for growth, learning, and greater understanding.

“We went to Chengdu for a week in order to learn about Sichuan culture and grow with the Chinese students,” Reina Dreyer (12) said. “At the end, we had a debate competition about whether secondary school should prioritize intelligence acquisition over emotional growth.”

Both Lee and Dreyer, in addition to being accomplished high school student-athletes, are first-generation Americans, and Dreyer speaks fluent Japanese while Lee speaks fluent Korean. Neither, however, speak Chinese, and Dreyer felt the most significant challenges resulted from communication barriers.

“There were times where I had to think of creative ways to communicate my thoughts and understand what they were trying to tell me,” Dreyer said.

Despite difficulties with expressing complicated expressions and feelings, Lee had a positive take on the communication challenges.

“They also led to hilarious moments and memories,” she said.

The Kalani team landed in Chengdu Shuangliu International Airport at 3 a.m. Tuesday, Nov. 19, where host families welcomed them with gifts and hugs. Five hours later, the team met at Hotel Jinzu Wei in Jinjiang, two blocks from IFS, “the four-story, neon-lit, uber-luxurious” shopping mall, and traveled to the famous Chengdu Research Base of Giant Panda Breeding.

After touring part of the 92-acre non-profit breeding center, “oohing and ahhing” over the giant pandas and red pandas, the team was introduced to regional specialties mapo doufu, kung pao chicken, dandan mian, and ganbian sijidou. Their first foray into the renowned spiciness of Sichuan cuisine was toned down for the American tourists, but by the end of the trip, when the whole group had hot pot, most were begging for more “numbing” spice.

In addition to the panda preserve, the team visited other tourist attractions like the IFS Building, a shopping mecca featuring a sixty-foot panda and an indoor ice skating rink, and the Wide and Narrow Alley, which Lee said was her favorite part of the trip.

“The Wide and Narrow Alley was amazing for two reasons,” she explained. “First, the alley was full of luminescent lanterns and shops packed with miscellaneous items. Right next to a stand selling Sichuan barbeque meat sticks, a couple of women were cleaning people’s ears with what looked like long needles out in the open! The atmosphere was wonderful especially at night as people were able to just walk around as if it were 12 in the afternoon.

“Secondly, I was able to interact with Chinese high schoolers to find that they were not all that different from myself except for the language we spoke,” Lee said.

Most of the activities centered around cultural attractions, like an art gallery celebrating local photographers and the 92-acre Jinsha Museum. The site, discovered in 2001, stands in the heart of the city and dates back to 1600 BC. There, students got to see remnants of the “most concentrated ancient ivory” among its kind in the world, according to the museum’s website.

“The middle school children were so adorable and eager to talk to us and the university was very beautiful,” Dreyer said.

At 9:30 a.m. every day, each class of 6th, 7th and 8th graders files to the school track to perform 30 minutes of coordinated exercise on the in-field while teachers run beside them and the school’s dean calls out inspirational messages and health and nutrition tips over a loudspeaker. The Kalani team joined in and Dreyer and Lee said all-school daily exercise programs would be a good idea for American middle schoolers.

The Chinese students had the extra challenge of debating in their second language, but many were such accomplished English learners that the language was not a barrier.

The debates were scored on five categories: Quality of Arguments, Confidence, Clarity, Preparation, and Overall Presentation. The Kalani team won their first round and scored the second-highest score overall but had to drop out in the round of 16 because Dreyer got sick. In the end, the two-person team from Louisville, Kentucky, members of their school’s Policy Debate team, beat out the team from Chengdu’s sister city Phoenix, Arizona.

“I think debate equips students with skills essential and beneficial for the real world, in any field,” Lee said.

Overall, Dreyer and Lee said the trip was rewarding and hope that other Hawai’i public school students get the chance to experience the Chengdu Youth Debate Challenge. They also have advice for future participants.

Lee said that keeping an open mind and focusing on the “little experiences” rather than worrying about the debate is essential.

”Soak up as many experiences as possible and don’t be afraid to try new things,” she said.