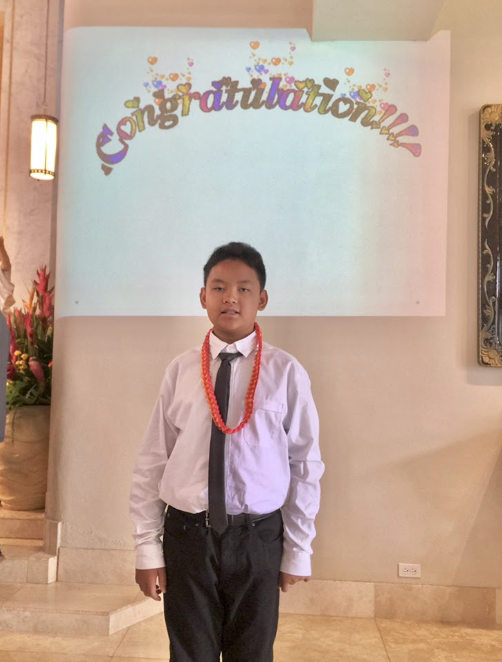 Sean-Lester Sereño is a 12-year-old boy, who is five feet three inches tall, with short black hair, dark brown eyes, and blue braces. He attends a private school named Saint John the Baptist Catholic School in Honolulu, Hawaiʻi, where he is in the 6th grade. His mother is a nurse, and his dad is an engineer.

When he was 7, he wanted to be an astronaut. Now, a little older, he wants to be an engineer like his father. Mechanical, electrical, civil? He doesnʻt know yet — all he knows is that he wants to be just like his dad: strong.

He has two older sisters, Hannah and Abby Roxas. He has a dog named Speedo, his best friend. Sean is just like any other kid: he loves fishing and playing with Nerf guns, and living his best life with high-functioning autism.

High-functioning autism is described as lacking communication, emotion recognition and expression and social interaction. People who have high-functioning autism don’t naturally read social cues and might find it difficult to make friends. They can get so stressed by a social situation that they shut down. They don’t like eye contact or small talk.

Being on the spectrum of autism is portrayed as different. At the Mayo Clinic’s online website you can find a brief summary of how kids on the spectrum follow a specific behavioral pattern. However, at the bottom of the list, they bullet: “Doesn’t express emotions or feelings and appears unaware of others’ feelings. Can’t start a conversation or keep one going, or only starts one to make requests or label items.”

Seeing this, many people would be confused as they get to know Sean. Although this might be the case with a variety of kids, Sean is different.

“He will start conversations; he loves them,” his mother Nida states. “Sometimes heʻll keep the conversation going, about anything, just to fill up an empty room. There were times where his dad and I wanted to take him out of school. He wasn’t making friends and it was hard to see him like that… We were confused as to why he was so social around us, but couldnʻt stand anyone else. We thought he just had anxiety here and there.”

It’s crazy how imaginative kids are. Sean and I were sitting in the living room doing nothing. We made eye contact and he lifted his finger to move his nostrils up.

It was silent for a few seconds. He stared at the blank television screen.

“I don’t like big boats. They scare me. Why would someone want to die like the movie where the big boat sinks.”

With no idea where those sentences came from, I asked him what he meant and why he was thinking of boats.

“I think they are scary.”

“I have no idea where people get their studies from,” his mother said. “Yes, many people on the spectrum, like Sean, do not understand emotions right away, but when they do, it will hit them like a truck. They feel so much more than we do after they understand what exactly is going on.”

An online website, Autism Awareness Center suggests that sometimes homeschooling is a good thing as it  “can create an educational program that fits the learning style of the child.”

Taking many factors into consideration, the Sereño family made the decision to keep Sean in school.

“One day, it was maybe a year ago, Seanʻs teacher wanted us to have a talk,” Nida said. “Kids werenʻt being the nicest and his teacher noticed Sean laughing along as they bullied him. Of course, it alarmed the teacher. She told us she was worried. We had a talk with Sean to explain what was going on and why he didnʻt say anything to us, and he sat there, just crying. Can you imagine your 10-year-old asking whatʻs wrong with himself?”

Most times, you can distinguish someone with a disability by their appearance. Thatʻs the first thing that pops into someoneʻs mind: an autistic kid. It is disheartening how people think, but itʻs natural instinct.

“You never say ʻan autistic kid’,” Nida states. “I donʻt care if itʻs someone I just met or someone Iʻve known for a while. I will correct them. You never ever label someone first. He is a child. His disability does not define him and I canʻt stress that enough. He is a kid with autism.”