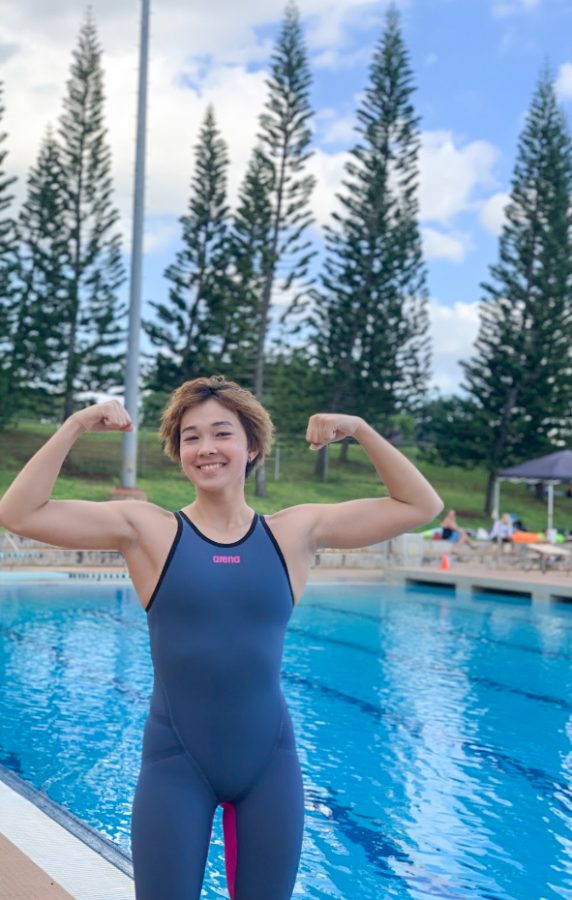 Reina Dreyer (12) flexes as she readies to compete in her final OIA Championship swimming meet. She won three first place medals and one bronze medal, and helped her team win the OIA Championship team title.  Photo by Lin Meyers 2020.

Confident, ambitious, and outgoing: these are three of the many characteristics that describe Kalani senior Reina Dreyer. Dreyer is a top scholar, has a 4.2 GPA, and earned a perfect score on her ACT her junior year. As captain of the Kalani swim team and president of the student body, when does she ever have time to study? What does she do to ease all her stress?

Dreyer started swimming at the age of 4 and started competitive swimming at 10. She joined Splash Aquatics to learn the fundamentals and is now swimming on the club team, Punahou Aquatics. After years of training and competing in the sport, she has learned to love the backstroke.

Dreyer was part of the Kalani Girls’ team that beat the OIA incumbent team from Kaiser on Jan. 25. She won three first-place medals in the 200 Medley Relay, the 400 Free Relay, and the 100 Free (individual). She also placed third in the 100 Backstroke.

After three years of coaching her, Victoria Ruelas knows Dreyer as a strong student and swimmer who works hard, is dedicated to what she does, and has a great sense of humor.

“She has the potential to be a great leader,” coach Victoria said.

In addition to swimming, Dreyer is involved in the Kalani Association of Students (KAS), the school’s student-led government organization on campus. She was elected KAS president in her junior year and is now the student body president.

“I really wanted to give back to Kalani,” Dreyer explained. “I was the best and most experienced for being president.”