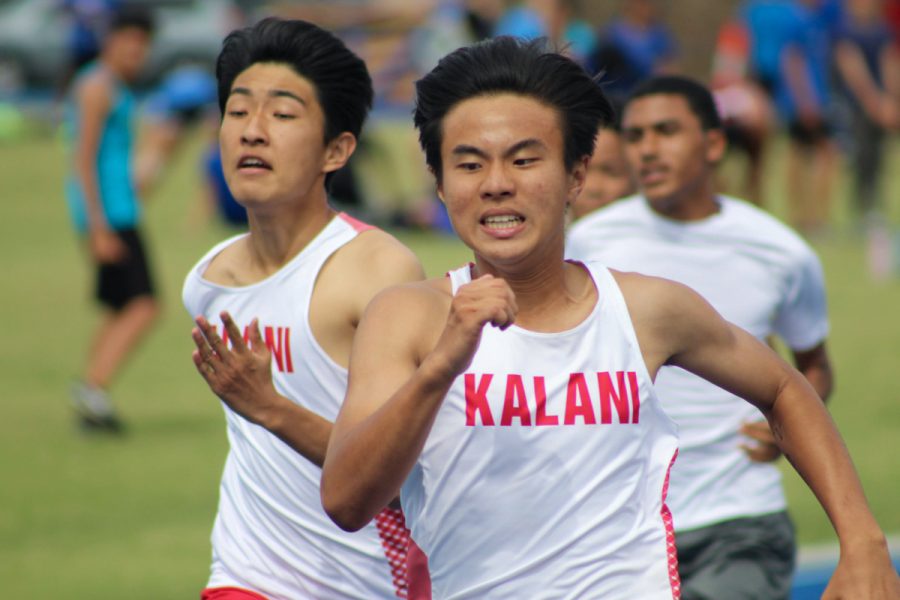 Jay Suh (10) and Aiden Cheung (10) battle down the straight in the 100m dash at the first OIA Track & Field meet of the season at Moanalua High School on March 7. Photo by Monica Mau.

Another spring season has arrived for Kalani’s Track & Field athletes. From February, Kalani’s “trackies” have been practicing from 2:15 to 5 p.m. every day, working on throwing, sprints, hurdles, weightlifting… you name it… always pushing themselves and their teammates’ boundaries to become faster, stronger, and more powerful.

Jennesice Sueing (10) is a second-year thrower who placed in the OIA JV Championships last year for the discus and shotput, and the 100-meter hurdles. Sueing practices every day to improve her distance, stance, throws, sprinting and technique.

“I hope that I get a PR (personal record) in all my events and make championships again and improve in my events,” she says.

Atlantica-Taina Tanuvasa (10) joined track last year as a freshman and made the Varsity team. Many members of Taina’s family started throwing in high school and became decorated state athletes so it is in her genes to throw. Her steps led her in the right direction when she placed 7th in Hawaii State Track & Field Championship last year for the discus.

“It feels nice to be a part of this team and I get to watch newcomers learn and improve every week like I did when I first joined,” she says.

For the season of pushing your boundaries and challenging yourself, Tanuvasa is hoping for her teammates and herself to improve on strength, speed, growth, and distance for an unbeatable season!

The head of Kalani’s JV and Varsity throwing, Lene Tanuvasa has been coaching at Kalani for 3 ½ years and was a sprinter on his school’s track team in high school. His eldest daughter earned a college scholarship for both the discus and shotput and still holds the ILH discus record. He coaches his younger daughter Taina Tanuvasa on Kalani’s varsity throwing team.

Tanuvasa says he wants nothing but to see his throwers push themselves and practice with 100% effort.

”I’m looking forward to seeing all the throwers improve from last year and for the new fellas to learn something new,” says Coach Lene. “The throwers must finish hard till the end of the season.”

Kalani took many wins and some losses in the first meet, but their enthusiasm and effort never faded on the field. The team is looking forward to upcoming meets and is excited for what the rest of the season has in store for them.