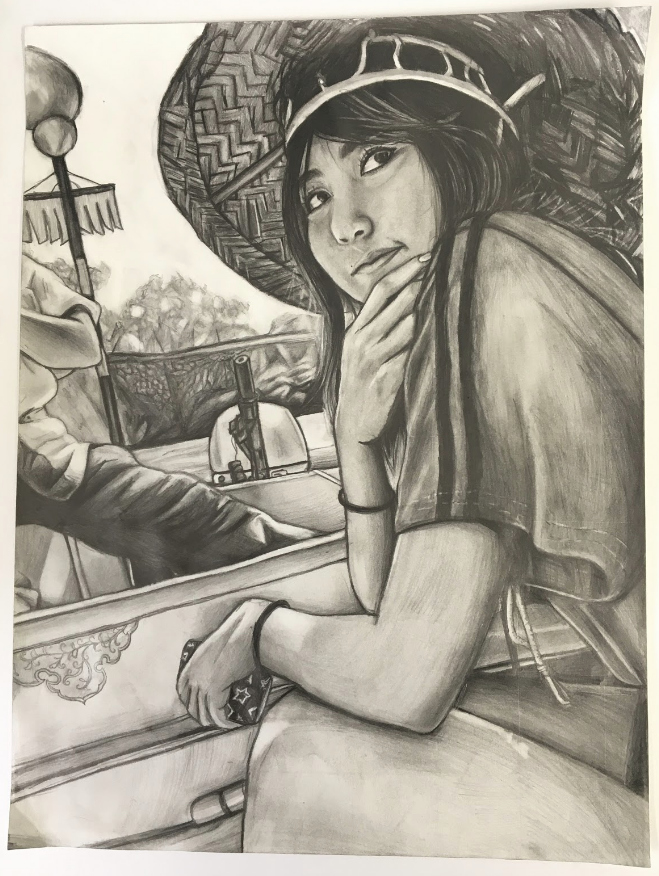 Senior Maria Tanaka did a self-portrait in graphite from a trip to Osaka. She was the first place 2020 Congressional Art Award winner. Photo courtesy of Mr. Mosher.

Congressman Ed Case mentioned in a press release that every spring the members of the U.S. House of Representatives organize a national high school arts competition. The competition is an opportunity both throughout the country and in our congressional district to recognize and promote artistic talent.

The overall winner of the competition for the district will be shown for one year in the U.S. Capital along with the other winners nationwide. This year, Tanaka receives that distinction.

Congressman Case announced Tanaka as the winner of his District on May 1. The Kalani senior won for her art piece in graphite titled Boat Ride.

Tanaka said she found a nice picture of herself on a boat from her trip to Osaka. She wanted to challenge herself to do another portrait with a difficult background which led to the creation of her art piece.

“Honestly, I felt surprised when I got a phone call saying that I’ve won the Art competition,” Tanaka said. “It was funny at first because I forgot which of my artworks I submitted so I tried to figure out which piece got in. But I was really proud of my piece! I felt like I did my best on it.”

There are several requirements that have to be met in order to submit: the artwork has to be two-dimensional, no larger than 26 inches high, 26 inches wide, 4 inches deep, and it must be an original design and concept.

“We use a grid system in order to copy accurately from a portrait photograph,” James Mosher, one of the art teachers at Kalani High School said. “Students draw a grid on a photo they took, and then double the grid size on the drawing paper. Basically, they just need to draw exactly what they see in each square on the photo.”

Maria Tanaka and one other person will receive a round trip ticket on Southwest Airlines to attend the National Awards Competition.

Tanaka has taken art since freshman year at Kalani. She started with General Art with Mrs. Katasako then switched over to Drawing and Painting with Mr. Mosher for the next three years.

“I’ve improved over the years due to practice and all the guidance from Mosher,” Tanaka said.

“I wanted to do an art piece that represented Hawai’i so I decided to draw Waikiki Beach and Diamond Head,” Wu said.

When creating Beachy Keen, blending the colors was easy and the oil pastels didn’t need time to dry which made it easier to layer on the colors, Wu mentioned.

Her art piece will be displayed in the District Office of Congressman Case in downtown Honolulu, along with a certificate.

“It was my second time using oil pastels so it was difficult in the beginning,” Wu said. “It is hard to get oil pastels off of paper so you have to be careful.”

“Since Clara won first place last year, I honestly didn’t think she would win first again this year, and I even told her so,” Mosher said

“Coming in first last year, and then third this year is quite an impressive run!” Mr. Mosher said. ”We saw her piece at the Capitol, and even went to the National Gallery of Art to see all the awesome art there. That being said, I am happy for Maria for winning first place!”