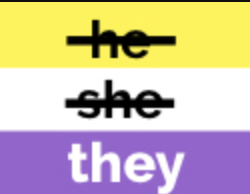 Nineteen states allow residents a third gender option on their driver’s license, and 13 will enable that option on birth certificates according to Identity Document Laws And Policies. Quite a few people now identify as neither male nor female, but nonbinary. So, how can we make changes to be more accommodating and understanding to everyone?

People must be able to select a gender option other than “girl” or “boy” on official forms. Adding more gender options would help with misgendering people, accommodate an increasing number of people who identify as something outside of the gender binary, and be a good representation of cultures with more than two genders.

No one person can say what being misgendered feels like, but many will say it feels horrible. This is especially true for transgender and nonbinary people who say being misgendered hurts. They also say that being asked to choose either boy or girl is harmful to those who are neither. Adding a third gender harms no one but would mean so much to those who fit into that third option.

People identifying as something outside the gender binary are becoming more recurrent over the years. According to St. Louis Public Radio, a 2020 census revealed that close to two million Americans identify as nonbinary and an increasingly common identity among younger generations. With those more youthful generations, various gender identities will hopefully become more normalized. In preparation for that, adding more gender options on official forms should be a given.

Many will argue that scientifically, there are only two genders and that nonbinary people are just following a new trend of being LGBTQ+. However, scientifically, this is untrue. Yes, there are two sexes most commonly recognized — male and female — but there are also several others. People born with chromosomes that aren’t inherently male or female are often called intersex. Additionally, sex and gender are two different things that often get mistaken for the same. According to the Canadian Institute of Health Research, sex is determined by the biological attributes found in living things. In contrast, gender is a social construct that influences how people see themselves.

It is also historically inaccurate. There are quite a few cultures that recognize more than two genders; for example, the Two-Spirit people of North America who are perceived as half-male and half-female, or the Sekratas of Madagascar, part of a third gender in their culture (Taylor, O.). Even Hawaiian culture had a third gender; mahu were considered somewhere between male and female, and Hawaiians celebrated their differences (Snow, J.). These examples show that the concept of nonbinary people is not new nor a trend.

Luckily, the solution to this is an easy one: include a third gender option on official forms to acknowledge gender non-conforming people.

In every-day life, the best thing you could do for a nonbinary person is simply respect their identity and ask for their pronouns. It takes time to get used to, but hopefully, it will eventually be normalized all around the world.

Schmid, E. (2020, March 17). The 2020 Census Is Underway, But Nonbinary And Gender-Nonconforming Respondents Feel Counted Out. Retrieved from https://news.stlpublicradio.org/politics-issues/2020-03-17/the-2020-census-is-underway-but-nonbinary-and-gender-nonconforming-respondents-feel-counted-out