The Second Yoshina — this one’s science-y! 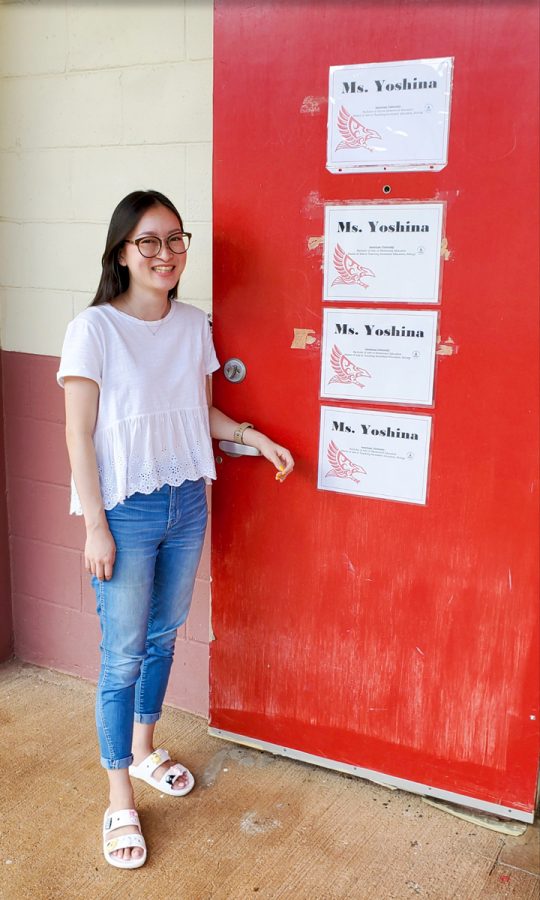 Miss Yoshina stands beside her classroom door, which displays all of her academic degrees. Photo by Ranson Silva.

Carlynn Yoshina: Ravenclaw, and baker, a graduate of Iolani and alumni of American University in Washington, D.C.

Yoshina teaches the sciences, specifically chemistry and marine biology. She describes herself as enthusiastic and sarcastic, but her other merits shouldn’t be ignored. Yoshina is social and loves interacting with her students, building friendly camaraderie with them.

Yoshina’s students gushed about the easy rapport between them. She’s commonly referred to by her students as caring.

Miss Yoshina spoke about how she loves it when students make and ask relevant questions about science. She values the moments when she and her students can go farther than the surface level.

“She’s very loving,” Rion Yamamoto (12) continues. “She made every bit of class interesting, but she works too hard.”

It’s not hard to be invested in her students, she says. Her connections with her students are a facet of teaching she enjoys.

“Miss Yoshina’s kind and friendly,” Gillian Regidor (12) says. “I liked how she would interact with us and talk to us like friends.”

“She’s cooler than me,” laughed Yoshina-Nygren. “People think we’re twins. I think it’s because of the masks. And we both wear glasses.”

When prompted about advice for new teachers, Yoshina-Nygren said they need to stop with the imposter syndrome, that it’s a hard job, and even though you’re doubting yourself, you’re really you’re doing fine. She said the imposter syndrome takes root in your mind, especially when you’re just starting.

“You have as much responsibility as the most senior person there and the least experience, but you’re still trying to hold yourself to a high standard,” Yoshina says. “Teachers are really hard on themselves.”

As a younger sister, Yoshina turned out to be a good older sister to others. A career with education had been on Yoshina’s mind for a while as she worked as a “Big Sister” in the Big Brothers Big Sisters program as a junior in high school.

She ended up as a mentor to a 2nd grader, she then had an epiphany — that she enjoyed teaching.

“I realized I really liked talking to and interacting with my “Little Sister,” and made the decision to become an elementary school teacher,” Yoshina explains.

Disclaimer: YOSHINA and YOSHINA-NGYUEN are not the same people; one is focused on the sciences, the other on Latin and English.