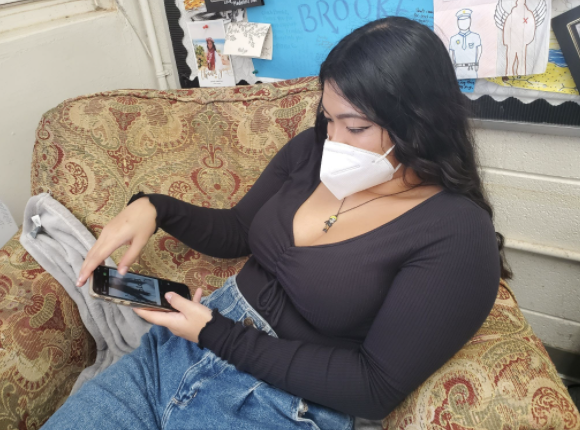 Lauren Vierra (12) scrolls on Instagram, her favorite social media app. “It’s got it all”, she says. Photo and caption by Lily Washburn.

Generation Z — those born between 1997 and 2012 — is the first generation raised on social media and smartphones, and with immediate access to information. According to a research poll by Statista, teens and children spend an average of over four hours a day on their phones as of June 2020.

Teens report frequent exposure to violent and graphic content on social media platforms like Snapchat, Instagram, and Tiktok. Many have expressed concerns around the overwhelming presence of sensitive media online and the virality of this content.

Lauren Vierra (12) recalls seeing disturbing content on social media since she was as young as 12 years old.

“It was on Instagram [and] it had absolutely no warning or trigger warning,” Vierra says. “It was just some dude jumping from a crane in an urban setting. I remember there was sound, but the only sound that I remember was his body crunching when it hit the ground. So, you know, that wasn’t great to grow up with.”

According to the National Institutes of Health (NIH), over-exposure to violent and graphic content like this on social media can have damaging psychological impacts on children and teens. Repeated exposure to emotionally stimulating or violent media leads to the habituation of certain emotional responses, otherwise known as desensitization.

The motives for why people share content like this aren’t clear. One assumption some teens make is that sharing sensational content spreads awareness of important issues by capturing viewers’ attention and provoking strong emotions.

Jasmine Rossiter (11) explains how she sees people on Instagram repost graphic videos and images on their stories with the intent to spread awareness. She understands this motive but wishes it could be executed in a more sensitive way.

“You can spread awareness, but other people do not want to see dead animals on their stories just randomly like, be mindful!” she says. “Link organizations; give other details besides graphic pictures. I guess that appeals to more emotional sides, but like, that’s too much.”

Virgil Lin (11) shares a similar perspective, explaining that it’s “a bit distasteful” due to the graphic nature of the content.

“It doesn’t necessarily have to be that violent,” he continues. “There are other methods to delivering information or awareness. You don’t have to show someone being shot or someone falling to their death in order to get a message across.”

Another explanation behind why graphic media goes viral online is that some simply find it riveting and compelling. It’s like watching a horror movie; people just can’t look away.

“They want to see other people hurt,” Vierra says. “Some people like that type of depravity and it’s a lot more common than you think and it’s very scary.”

Vierra explains that the attention these posts get is another reason why they are so widely shared:

Vierra adds that her childhood was different than most, so these videos don’t impact her as much as they may others. However, she expresses her worry for the kids who are being exposed to these videos.

“I was already kind of jaded to loud noises, people talking over you, angry voices… but seeing this casual amount of death being showcased like it was just some commodity, some video that you could just swipe left on or down on…it’s just really concerning,” she says.

While many teens like Vierra report seeing violent content online, Lin confesses that he does not; Most of what makes up his online content are simply snippets of people’s daily life.

“It’s mostly just personal stuff like trips [or] expeditions with friends,” he says.

Lin admits that he doesn’t do anything intentionally to avoid seeing this type of content; it just doesn’t show up on his feed.

There are measures that can be taken to better filter what you see online. According to their website, Instagram’s Recommendation Guidelines were “designed to help ensure that we don’t show you sensitive content from accounts you don’t follow.” Sensitive content includes posts that don’t necessarily violate Instagram’s rules but may be violent or disturbing to certain people.

However, even Instagram recognizes that these aren’t completely effective, and released a setting called Sensitive Content Control on July 21, 2021.

This new feature allows users to adjust the levels of sensitive content that they are exposed to on their feed. The “Allow” option, which does not restrict sensitive content, is not available to users under 18.

While settings like these can help to create safer places online for children and teens, it’s difficult to ensure that they will be completely effective in filtering out all graphic content on the internet.

Vierra admits that it’s upsetting how normalized violent content has become online, but she hasn’t completely lost faith in the possibility that if more safety measures are taken, things may change for the better.

“The world is going places,” Vierra says. “It might not be going in the right places, but I think enough people are getting worried about this…that there is hope.”