Roosevelt High Is Ready For Spectators 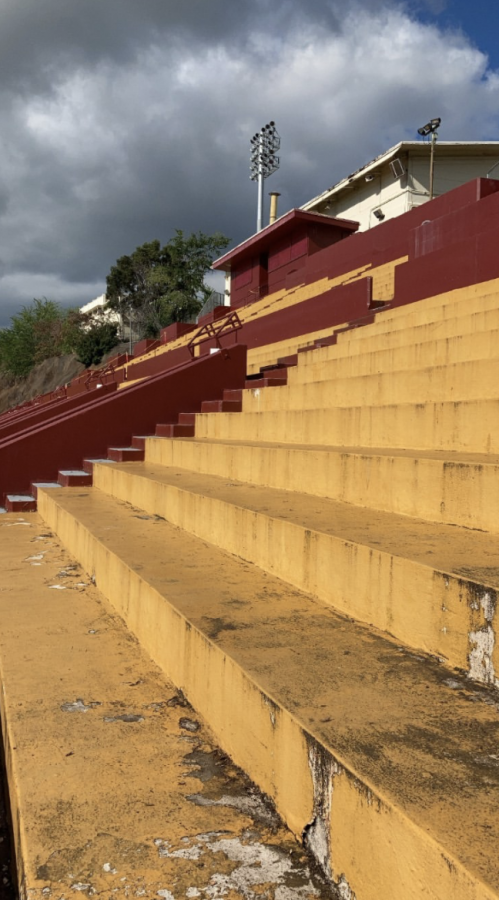 The stadium at Roosevelt High School was empty for 18 months as COVID-19 regulations prohibited spectators at high school athletic events. All of that changed on Oct. 20, when the OIA eased restrictions. Today, spectators are allowed at OIA sporting events as long as they are vaccinated, masked, and follow social distancing protocols. Photo by Azriel Badon.

On Oct. 20, the Oahu Interscholastic Association (OIA) announced that spectators will now be allowed to attend high school sporting events as long as they follow COVID-19 regulations such as being fully vaccinated, wearing your mask, and social distancing still in order.

“I’m so excited that games are now in-person,” Oiwel Kebekol, a junior at Roosevelt High School says. “Seeing it up close and actually being there is much different than just hearing about whether we won or not.”

She expressed that it was a struggle [for fans] not seeing the games in person because spectators weren’t there to celebrate the team’s victories and couldn’t support and cheer for them.

“Personally, I am very excited that they are allowing spectators during games because it allows us to get the full experience of playing in a high school environment,” Lauren Miller, a player for Roosevelt’s Girls Volleyball team, expresses. “I’m hoping that even with the limited number of spectators, the presence of people in the stands will raise our energy and general feeling of school spirit.”

Miller is a sophomore, and this is her first year playing for her school’s volleyball team.

“Playing without spectators was nothing new to me after this past year of playing through covid,” she explains. “Having spectators live brings a different energy and adds more pressure to the players to perform well.”

She says that it was difficult to create excitement and encouragement for themselves.

“I am excited for the athletes to showcase what they’ve worked on and to finally play for their family and friends and classmates, especially for the seniors because last year they had no season and it really affected them mentally, so I think mental health was also an issue,” assistant Roosevelt Girls Volleyball Coach Ted Lubong disclosed.

With public schools opening up to spectators, Coach Lubong expressed that it almost feels like a “rebirthing” for the players and team.

He says some challenges were creating a space with self-motivation and recreating the enthusiasm that the audience brought.

“What we did was have the team cheer for themselves,” he explained. “We have three teams, the JV, the Varsity White, and the Varsity, and each team, when they’re not playing, becomes the audience and fans for their teammates. That’s their audience, that’s their support.”

He says a lot of it involved encouraging one another and picking up after each other when mistakes were made.

“We work with young athletes, and a lot of the time, if they don’t get the encouragement, then they’re not performing as well as they can,” he says.

Coach Lubong later revealed that the team became closer during this period when spectators were not allowed.

“After high school, all you’re going to remember is the relationships you have and being able to enjoy a sport you love,” he added. “They’re going to take these memories into their adulthood.”