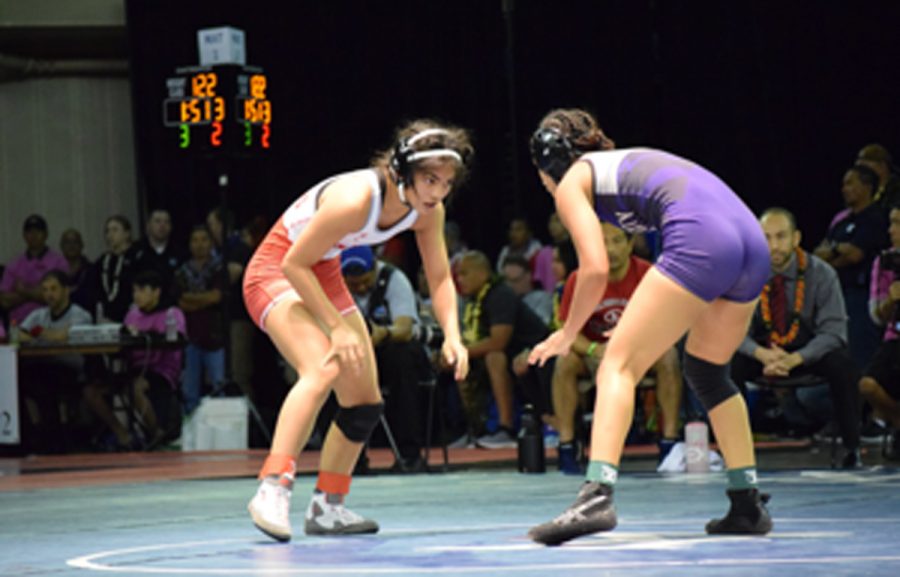 Paulino faces off with her opponent. at the finals of the State Championship Wrestling competition on Feb. 22. Photo courtesy of Emily Paulino.

Wrestling at Kalani is back in action this winter sports season after athletes could not participate last year because of the state of the world.

The last playable season was back in 2019, which Coach Racer stated was “the best” season he’s had as a coach.

“Probably my favorite season we had; four boys placed in the states tournament, which is more than I’ve ever had ever before,” Coach Racer said. “Then we had one of our girls be state champ so that was awesome.”

He also mentioned that the JV girls team won the Oahu Interscholastic Association (OIA) in 2019, so he’s looking forward to doing well this season.

“I actually have really high expectations for this season; my boys team, especially my varsity boys team has a lot of seniors, a lot of 4th-year seniors that are really good,” Coach Racer said. “Couple of them were already state placers when they were sophomores, so you know returning state placers is always really good to have on the team.”

Kade Okura (12), who has been on the wrestling team since his freshman year, says he has one goal this year — to “win state champs” — which fits right in with Coach Racer’s goal.

“My goals: I would love to have a boys’ state champ which I’ve actually never had in my coaching career so far,” Coach Racer said. “I’ve had three girl state champs but never a boy state champ.”

Even though most of the team hasn’t been on the mats since 2019, Coach Racer is optimistic about playing. Instead, he says he’s “worried” about some of the seniors.

“I have a group of seniors that because we didn’t have a season last year kinda started getting a job, focusing on other things, and those are the ones I really gotta dial back in,” Coach Racer said.

At the end of the day, Coach Racer feels that wrestling is more about having fun, and he’s excited for it all to start.