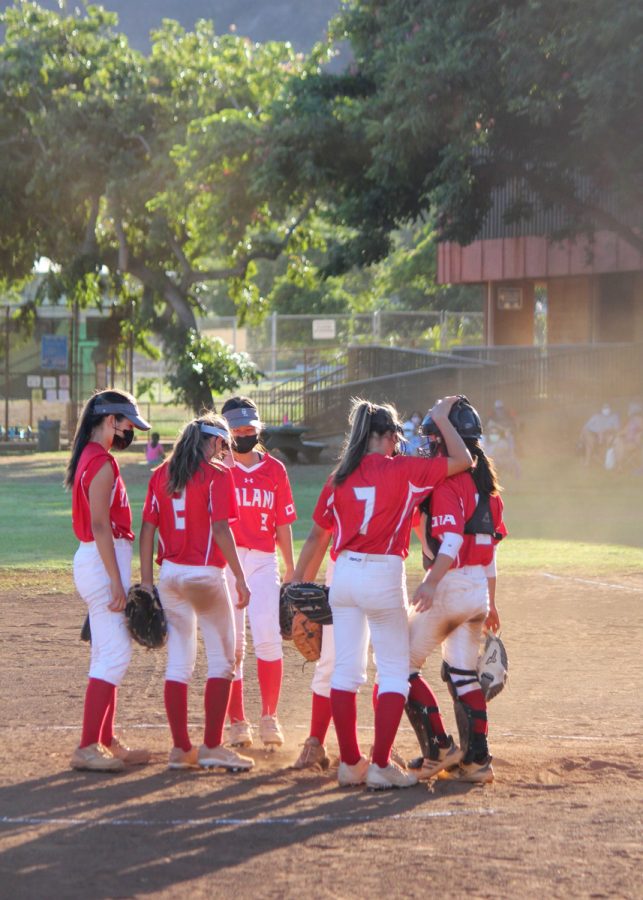 The Falcons take a timeout after the sixth inning to allow them to recuperate and stop Kaiser's scoring momentum. Photo by Shyloh Morgan (12).

Last spring, Varsity softball lost to Kaiser (15-1), so coaches and players said they went into this game tense but eager to play.

“I was a little nervous at first because Kaiser is our rival school,” Ashlyn Sera (9) said. “But I felt a little better knowing that our playing field would be equal because we both have new girls and experienced girls on both teams.”

Arriving on Kaiser’s home field as visitors, Kalani was able to bat first. To kick off the game, I led off by getting on base by walking. Anti-climatic, but at least I got on base.

Up next, Ashlyn Sera hit a single up the middle to bring me home (1-0).

For the next three innings on defense, the Falcons would be in their zone. With each inning three up, three down.

“It felt good because I made some of those plays to contribute to those innings,” Haley Ching (9) said. “I was also super happy and satisfied with the team because it allowed us to hit more.”

The second inning had no action on both sides, but things quickly picked up in the third. I led off the inning again and got on base by an error made by the first baseman. Sera following hits another single to center to bring me home (2-0).

Rylie Kodama hitting third came up with a sacrifice bunt to advance Sera to second base. Haley Ching got on base by the second-baseman, making an error allowing Sera to score (3-0). Then Ching advanced to third base on a passed ball.

\At the same time, Kadie Carpio got on by walking, and next to bat was Jayslin Simpliciano. During Simpliciano’s at-bat, Ching sprinted home by another passed ball made by Kaiser’s pitcher, making the score 4-0. Later, Simpliciano brings Carpio home by hitting a single down third baseline, ending the inning 5-0 Falcons.

Kaiser got on the board in the fourth inning because of errors made by the defense, only allowing one run to score in that inning.

The fifth inning also caught action for Falcon’s offense. Unfortunately, Ching popped up to right field starting the inning, but Carpio luckily got on by walking again. Simpliciano was up next in the number six whole, already having a good game with being 2-2.

She stood at the top of the batting box and hit a home run to deep left field. The Kalani bleachers went wild as she made the score 7-1.

“It felt good because it was my first home run in high school,” Simpliciano said. “I was also surprised because I didn’t know it went that far until I saw Coach Gregg waving me home. Then I almost got out at home because I didn’t slide, which I thought was funny.”

Hina Iketani and Kalina Hotema, both new players, got on by walking. Kailee Gabris then grounded out, but brought Iketani in (8-1).

Back to defense, there was a minor hiccup with allowing Kaiser to get on base. However, we did not panic because Simpliciano came through, pitching three strikeouts.

Despite everything, the next few innings would be tough on the Falcons. A recurring pattern seen in all Kalani’s softball games, JV and Varsity, is that they let go of the gas in the final innings.

Last school year, the Kalani Varsity softball team played Moanalua and tied when they were supposed to win after losing stamina in the 6th, allowing mistake after mistake.

This was a near-identical feeling.

“When we were in those innings, I was thinking that I was tired and wanted the team to stop making careless mistakes,” Rylie Kodama (10) said.

We even had a chance to make a bigger difference in the score but ended the seventh inning with two strikeouts and a fly-out to the shortstop.

In the final inning, we lost control again, and it was a struggle to earn those three outs. Though even if the last two defensive innings were strenuous on everyone.

It was still a win, with the final score of 8-5 Kalani Falcons.