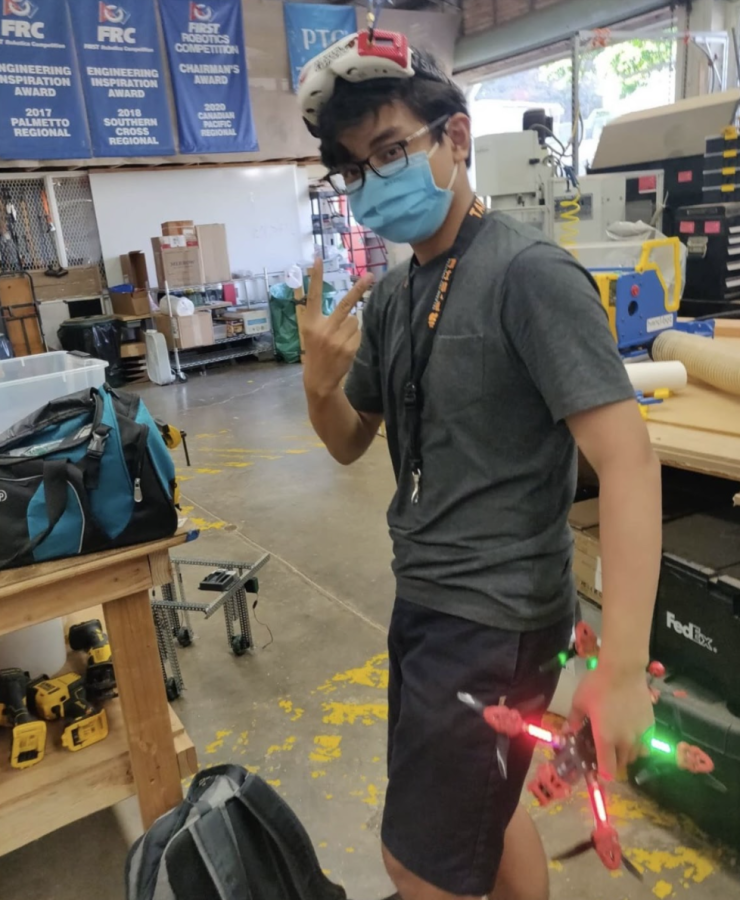 Kiet Pham is getting ready to fly his drone "Hyperion" in the back of J-Building behind the Robotics and Engineering classroom. The freshman Kalani student restarted and runs the Drones program as part of the Robotics team.

GPS LOCKED means ready for takeoff; time to put on the drone goggles. As the drone accelerates up into the sky, you can see everything in the video link from the goggles in the first-person perspective.

If you haven’t seen a drone, you’ve probably heard one fly around the Kalani High School campus after school. That drone belongs to Kiet Pham (11), who restarted and is captain of the Drones program on the Kalani Robotics Team.

“I [have] a deep interest in aerospace and aeronautical related robotics,” Pham said.

With an interest in engineering since 6th grade, Pham arrived at Kalani as a freshman and joined the Robotics team excitedly.

“He tells a lot of fun stories about when he did robotics in freshman year, and I think he tries to give us the same experience,” Drones and First Robotics Competition (FRC) member Chloe Ho (9) says.

He’s been on the team for 2 ½ years now and is one of the people relied on for both experience and engineering knowledge. He hopes to be an Aerospace Propulsion System Engineer, an engineer who helps build propulsion systems for spacecraft and aircrafts.

Pham gained his knowledge from time, experience, and from others.

One of Pham’s main contributions to the team is restarting Drones while he was captain of First Tech Competition (FTC) Team 9378.

He supplies the team through his own drone parts and donations received from team members.

In Drones, Pham teaches his own curriculum and provides hands-on experiences like soldering. FTC meets every Monday, Wednesday, and Friday and Drones meets every Tuesday and Thursday.

“It [leading Drones and FTC meetings] reduced the amount of free time that I had to prepare for FTC and Drones because I spent so much time at robotics,” Pham said.

He has a huge influence on the team. Pham is described as  “funny, kind, and crazy” by Richelle Chong (12) senior team member.

“He’s one of the few students who are very passionate about robotics, and it’s great that he’s stuck around to also get the other students interested,” Chong says.

Pham hopes to participate more often and share his knowledge and experience with others.

“It made me realize I like teaching people about my interests,” Pham says.