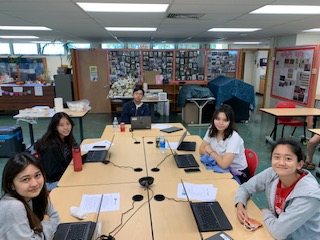 The Kalani LifeSmarts competition team, KALANI 3.0, finished in third place on Saturday, Feb. 19. "The competition was very close where we missed the opportunity to compete in the championship match by just two questions," teacher mentor Mike Zane wrote. Kalani 3.0 is made up of these five students: seniors Catie Achay, Phuong Huynh, Elena Terebenkov and Allison Vuong, and sophomore Brandon Tran.

LifeSmarts is an academic competition for grades 6-12 that revolves around five categories: environment, consumer safety, health, personal finance, and technology.

“They learned some things about the topic that were necessary for them to compete and not only to compete but for life in general,” their teacher mentor Mr. Zane said.

The winners of specific categories also earned prizes such as gift cards that ranged from $75-$100, medals, swag bags, and other prizes from the numerous sponsors.

KALANI 3.0 was selected from 14 students participating in the competition. It’s a collaborative competition, but an algorithm puts the team together based on scores from a preliminary test.

“It was fun just to participate,” Mr. Zane said.