Why Tick, Tick… BOOM! is the PERFECT Musical Movie-Adaptation 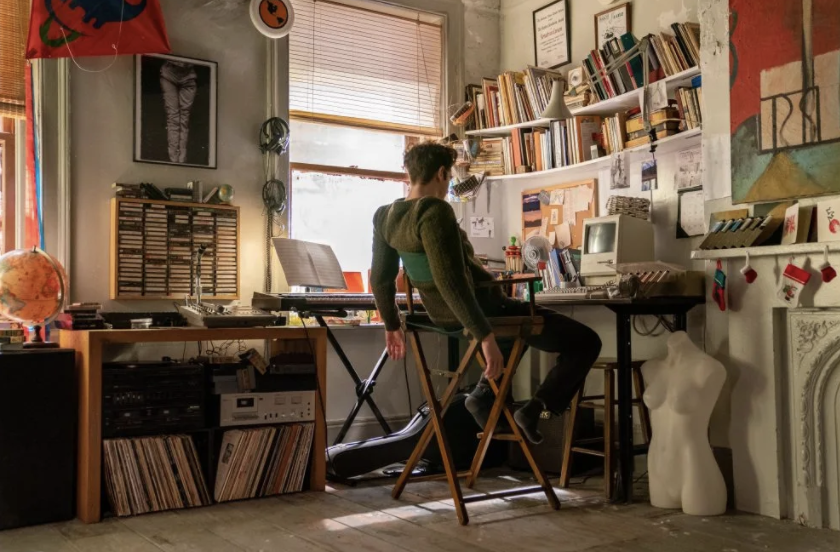 A still from the film shows Larson sitting at his Macintosh computer in his apartment struggling to write.

Tick, Tick… BOOM! tells the story of RENT writer and composer Jonothan Larson when he was living in New York City as a young artist in the early ’90s. It follows Larson as he works on his first musical, Superbia—a futuristic rock opera—and struggles to find success in the theater industry.

In the film, despite facing endless failure and criticism, Larson shows a sustained passion for his work.  He continues to take risks and make sacrifices in order to fulfill his life-long goal of making it to Broadway and revolutionizing modern theater.

We see how this stubbornness interferes with Larson’s relationships. As Larson watches the people around him accept reality and settle for more practical jobs, he remains set on this path of hardship and sacrifice.

Tick, Tick… BOOM! and RENT are a result of Larson’s undying persistence and dedication to his craft.

Tick, Tick… BOOM! was originally a one-man rock monologue and later three-person off-Boadway musical adaptation and does an incredible job of adapting all versions of this story into an emotionally compelling, visually stunning film.

Something that makes Tick, Tick… BOOM! stand out from other movie-musical adaptations is its ability to utilize the film format to enhance the plot and bring it to life beyond the stage.

A great example of this is how the movie transitions between Larson performing his one-man rock monologue originally titled “Boho Days” and living through the period of his life that it’s based on.

The movie opens with Larson playing the piano in front of a small audience at the Second Stage Theater as he sets the scene to two years prior. We are transported back in time to his small studio apartment in SoHo New York where he is preparing for the first-ever workshop of Superbia.

We are immediately immersed in Larson’s world. His apartment is recreated in immaculate detail, from the paintings on the walls down to the records on the sagging bookshelf in the living room. The movie follows Larson on his commute to his part-time job at the Moondance Diner, taking us through early 90’s New York in the midst of the AIDS Epidemic.

The attention to detail that director Lin Manuel Miranda puts into every aspect of the film gives the audience a greater connection to Larson and his experience than any stage production could.

In addition, the film is still able to capture the vitality of Larson’s songs in the way that a live performance does through spirited dance numbers that bring us into his psyche. For example, in “No More” Miranda uses costumes and slow-motion to create

At the climax of the movie, Larson is struggling to find inspiration to write a crucial song for   Superbia before its anticipated performance in front of an audience of esteemed New York producers. Over the course of a week, he has made zero progress on the song. The night before the performance, Larson is losing faith. Overwhelmed by stress and the pressure to write, he goes for a swim in his local pool.

In “Swimming” Larson is propelled by anxious energy as he glides through the water, his mind racing. We hear his inner monologue narrate every frantic stroke and breath as he gradually increases speed, moving faster and faster until suddenly, he falls still.

All at once, Larson has a revelation: as he floats in silence, the lines at the bottom of the pool gradually transform into bars of music. As the lyrics play in his mind, the audience sees them flow through the water around him.

He immediately returns home and finishes the song.

This scene is crucial in showing us Larson’s thought process and challenges as a writer facing a creative block.

According to J Collis’ book, “Boho Days: The Wider Works of Jonathan Larson”, Swimming was featured in some early versions of Tick, Tick… BOOM! but was cut for its three-person-off broadway adaptation.

In an interview with the Los Angeles Times, Miranda explains how this makes sense due to the entire song being set in a pool. On stage, the song doesn’t transfer well and loses some of its impacts since audiences aren’t able to see the imagery being described the way we can in Tick, Tick… BOOM!

In the film format, the song is able to live up to its potential by inviting us into the pool with Larson and creating a visual metaphor of his process in overcoming writer’s block. This truly encapsulates his moment of epiphany.

In the same interview, Miranda mentions how they filmed the scene at the exact same pool that Larson swam in. Larson’s inner monologue matches the markings on the bottom of the specific pool. This small detail brings the scene full circle.

The ways in which Tick, Tick… BOOM! effortlessly adapts this musical to the screen while simultaneously relating to all audiences through its portrayal of failure and growth makes it a film well worth seeing.