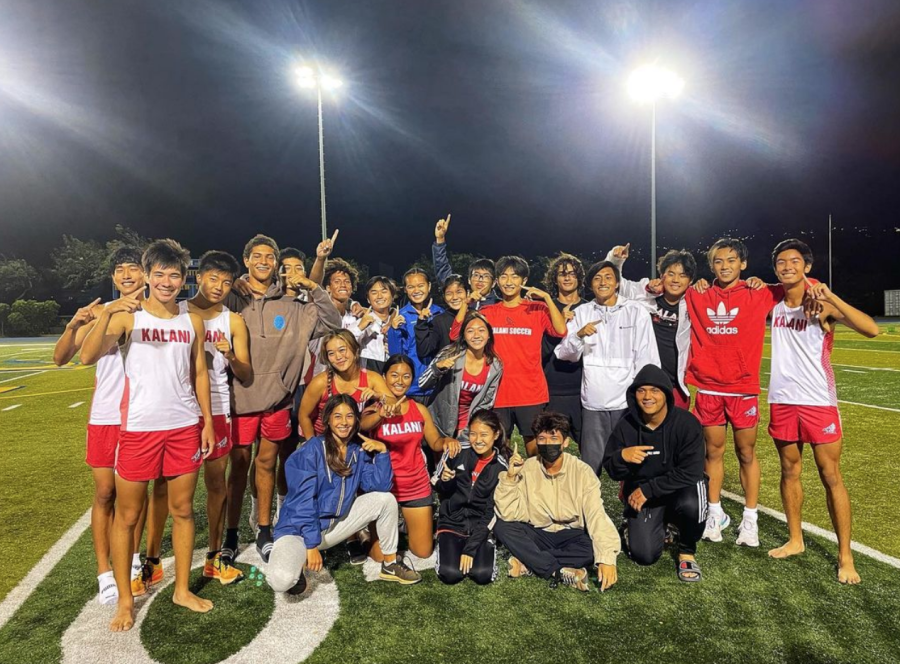 The Kalani Varsity Girls' and Boys' teams hold up No. 1s on the infield at Kaiser High School after winning the Eastern Division Championships on Saturday, April 16. Photo by Gabe Tom.

Before COVID-19 put sports on hold, Kalani’s varsity girls team won Easterns on April 14, 2018, and April 6, 2019. Sports resumed in the spring of 2021 but there were no championship meets and these Falcons are fired up and ready to compete.

Kalani’s top hurdler, Jennesice Sueing (12) has been a part of the track team since her freshman year but her sophomore year of track was cut short and she did not run in her junior year due to COVID-19. She finally has the opportunity to compete again, but won’t be competing at the Varsity Eastern Championship because of a knee injury.

“I’m really mad because I know I can’t compete this week,” Sueing said. “And I was really excited for this week and next week.”

The girls’ head coach, Brooke Nasser explained that the girls’ team this year feels a lot closer to her on a personal level. In her first year of coaching when they won the Varsity Eastern Championship, she had only coached those girls for that one year and wasn’t very close to them.

“This is the first year where all of the girls who are competing at the varsity level, I personally have coached for three or four years,” Nasser said. “I feel like they’re MY team.”

“I enjoy running with my teammates,” Miura said. “I think we all push each other to work harder and do our best.”

One of Kalani’s biggest scorers, Taina Tanuvasa (12) competes in Shot Put and Discus. Tanuvasa currently has the best discus mark in the state (115’6.5), and said her goal was to throw 125’.

“I can’t wait for States and am excited to see how my hard work pays off,” Tanuvasa said.

Tanuvasa says her favorite event is the discus.

“I love the feeling and instant gratification it gives me,” she said.