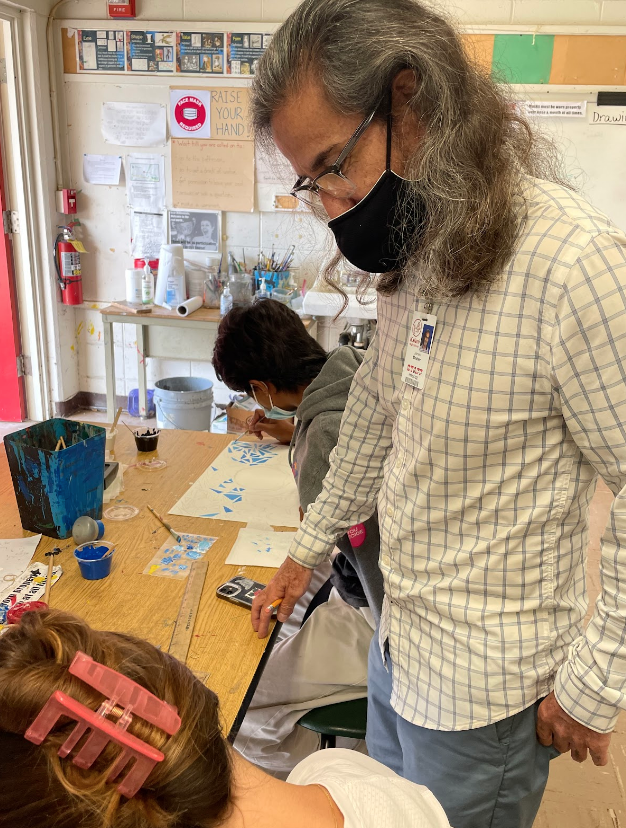 Mr. Mosher gives students individual attention as their work on their art assignments in his Drawing and Painting class. He allows students to be independent, and to work at their own pace.

Mosher hasn’t always had a passion for art. He says “fate” got him into it. He took an elective course at college which involved photography and realized perhaps art was something he had a strong interest in. He then decided to take a drawing class. His two-year Liberal Arts major turned into a Bachelor in Fine Arts degree; he graduated with a B.F.A from the University of Hawaii, Manoa.

“I know a lot of people say cliche stuff like it was my calling, but for me, that statement is so true,” Mosher says. “It’s been deemed my mission by God, the Universe, Fate, or whatever you want, to call that higher power.”

In Mosher’s art classes, students practice observational skills and work to showcase their creative abilities. His classes cover basic art skills such as shading, identifying complementary colors, and identifying and understanding the five art forms; texture, line, space, color, and shape. Projects given in Mosher’s class students include Still Life, Scratchboard, Grid Portraits, and Surrealist Projects. These projects allow students to find their style and grow as artists while perfecting their skills.

Sofia Garcia (11) has been a student of Mosher’s for the past three years and is in Drawing & Painting 3. She explains that Mosher doesn’t sugarcoat and is honest with his students, giving them critical feedback while encouraging them to do their best.

The way students start class will be different according to the level of art they are in. For Garcia, she grabs her drawing board and starts painting. More instruction from Mosher is provided for students in levels 1 and 2. Depending on what the class is learning, Mosher may give a lesson to freshen up students’ knowledge of their skills. Students have been working on a painting project, and Mosher has given the classes a quick lesson on the color wheel, going over how to mix paints to get secondary colors and tertiary colors.

“I like that his class is self-directed,” Garcia says. “I feel free to take my art at my own pace and to converse with other students on how their projects are going.”

Garcia recommends Mosher’s class to anyone interested in art and for anyone willing to put in the time and effort to work on projects even outside of class.

Mosher describes his style of teaching as more of a philosophy. He says that he keeps his teaching brief and lets the students take over their learning and experiment. He believes that art cannot be learned from watching a video or a demonstration but is something that takes practice.

Another teacher at Kalani High School, Brooke Nasser finds that her teaching style and philosophy are quite similar to Moshers. She teaches English and Newswriting. While Mosher and Nasser are not in the same department, they can bond over their similar interests and teaching philosophies. They were able to get to know each other better over the past two years, especially during the pandemic when students were not allowed onto campus, and only teachers were allowed on campus.

“He just champions students,” Nasser says. “He’s supportive of students. There are not many opportunities outside of school where someone’s going to champion you so we are lucky to have him.”

Through his teaching, Mosher says he has learned that he possesses more “patience, tolerance, and endurance” than he thought. The most rewarding thing about teaching in Mosher’s eyes is the growth of skill he sees in his students. Watching them develop their craft and personal style is his favorite part of being a teacher. He plans to continue teaching at Kalani High School.

A piece of advice that Mosher has for students is to be their authentic selves and to practice integrity. He says that it’s important for students to remember that the world may not be fair 100% of the time, but having good character can help you gain some humor and virtue. He believes that this is the key to living the most fulling life, having a good attitude. He also advises students to take a good look at the real world, not only the world they are engulfed on their phones.

“There’s a beautiful, whole, big, wide world out there, and they need to experience and explore it instead of having their noses six inches in front of a screen 24/7,” Mosher says. “Be a light unto the world.”