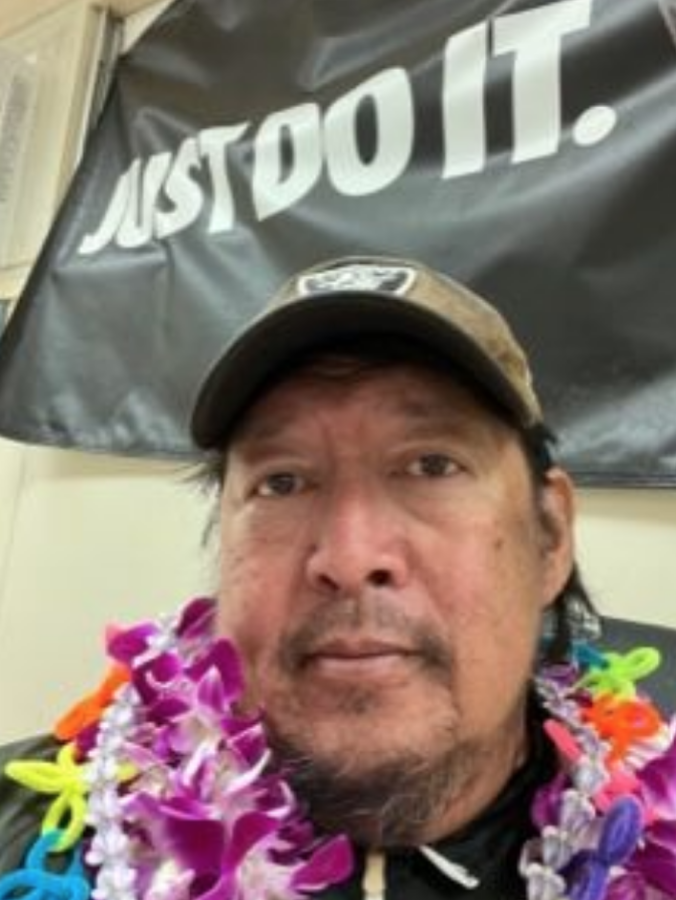 Mr. Pohai (Thomas) Lee steps away from a storied past with the Baldwin Bears to join the Kalani Falcons. This time, he’s doing without the football. Photo courtesy of Thomas Lee. Caption by Virgil Lin, 2022.

“In all my classes, I’m a floater, so I’ve had to walk to all the buildings: B, C, D, and E,” he chuckled. “[But my favorite is] the locker room because that’s where I’m pretty much based.”

Lee not only floats around campus (and the locker rooms) but through teaching as well.

“When you’ve been in education like I have for a lot of years, you just kinda roll with it,” Lee said. “Not stress out too much about it, just again, finding out how Kalani does things and adjusting.”

“The majority of them want to learn, and that’s a good thing,” Lee noted. “Anytime a teacher sees that, they want to promote that. So anytime I can help the student reach their goals or potential, that’s exciting to me.”

Lee’s educational instinct is honed from nearly two decades working in education, where he’s “been through the wringer in terms of experience.”

That experience originated with Baldwin High School on Maui, where he previously taught Health and PE. Lee also served as head coach at Baldwin’s football program for seven years, beginning in 2015, before stepping down in 2022.

“I wanted to take a break [from football] and kinda recharge my battery and focus on some other things that are important, y’know – family [and] my work in terms of professional development,” he said of his previous pursuits.

That led him to Kalani. When searching for a new path after Baldwin, the Falcons perched on Lee’s radar through previous familial and professional connections. For example, Lee had met Mr. Mitchell Otani in the past.

Despite being a teacher, Lee doesn’t discount the similarities between him and his students.

“I’m just like a freshman, actually,” he pointed out. “New school, new environment.”

He still revels in the novelty of attending a new school.

“I love it,” Lee said with an enthusiasm only freshmen can muster. “I definitely like what I see [at Kalani]… good culture, good teachers. They’re very personable and welcoming.”

Asked if nervous about the rest of the school year, Lee laughed, unfazed.

“That’s what’s exciting – not knowing,” he said. “But I like how things are going right now.”