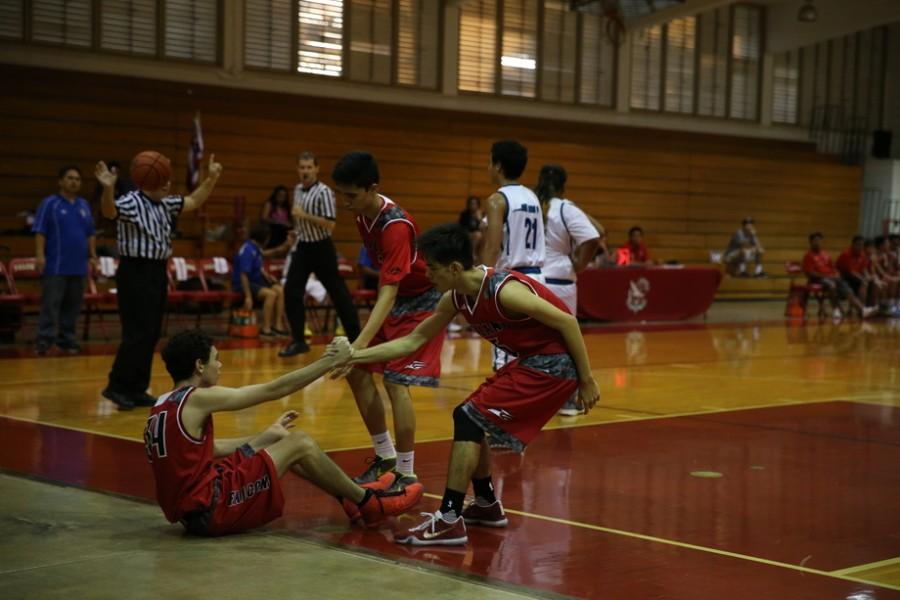 Basketball Team Comes Together as a Family

At one point during the season the team had a 10 game losing streak. The whole team had to learn how to be resilient and come back into the season as a family.  They ended that streak with a thriller win at Farrington. The score for the game against Farrington was 47-45. After the win at Farrington, they went on to have 3 wins and 1 loss in the rest of the games during the regular season. The last game of the regular season was against Roosevelt. They beat Roosevelt 64-50. Since it was the last game of the regular season, there was a senior night to honor the seniors. This year’s seniors were: Kobe Ikari, Miles Hannon, Akea Tolentino, John Lam, Sione Vea-Kava, and Jeffrey Wood. During senior night, the seniors get honored, receive leis, and take their last shot on the home court. Jeffrey Wood said, “I was really sad on the senior night because it was going to be our last home game in front of the crowd but was really excited to just have fun.” Head coach Nathan Davis said, “All seniors are exciting, none are boring. A lot has strong personalities.”

After the season was over Coach Davis said, “You can have too much talent and having 6 transfers is very difficult but the team was very resilient to overcome that new chemistry.” Jared Ki a sophomore center said, “ I learned sometimes it’s hard to win or lose a game with a team that works hard everyday.”

Good job to the Boys Varsity Basketball on a good season. Good luck next season!