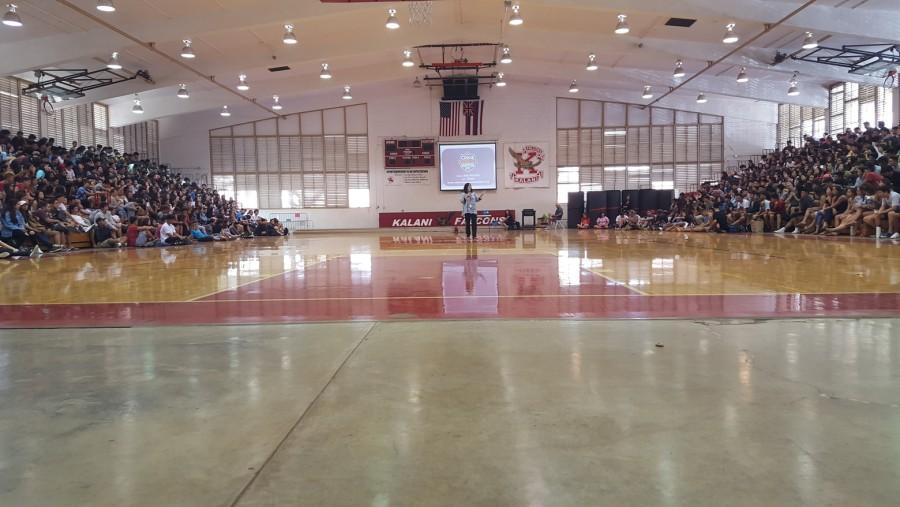 The issue of Cyberbullying

Adults love to tell this generation that we do a lot of things wrong. We’ve been labeled many things- lazy, dependent, and incapable of working for ourselves. The truth is, adults aren’t right about everything. But they are right about one thing.

Cyberbullying is a big problem that only seems to be getting worse.

The students at Kalani High School (i.e. teenagers) were given this message once again at the cyber bullying assembly- cyber bullying is bad, and we should feel bad. However, another message was intertwined into the assembly- it tried to convince students to lessen their use of social media apps and websites and advertised every possible negative aspect of social media.

For most students, that is when they stopped listening. Because the problem isn’t social media- it’s bullying. To tell students to give up social media is proposing something that just won’t happen.

“Cyber bullying has become an epidemic. Cyber bullies are cowards and don’t have the ability to do it face to face.” says Sgt. Kim, one of the speakers during the anti-cyber bullying assembly.

Society, in general, has come to the consensus that all bullying is bad- and it is. Bullying, in particular, has become an issue for our generation. But it has been an issue for many generations before us too.

We love Snapchat and Instagram and Tumblr- we love letting our friends know the cool things we do, where we are, who we’re with, and why. It is the equivalent of children obsessed with television in the 50s and conservatives starting a movement against the “deterioration” of society. Every single generation of youths has faced criticism from elders for their behavior. In the 21st century, the criticism to our youth is our use of technology, mostly smartphones.

“Before smartphones, Hawaii was #1 for girls (bullying) and #4 for boys. We want to prevent cyberbullying so it won’t get worse,” says the Representative from the Attorney General’s office, another speaker during the presentation. “The level of embarrassment [of cyberbullying] has multiplied and it always stares at you.”

Society has changed, as it has throughout history. Kids used to get yelled at for watching TV for too long and not doing something “productive.” We get yelled at for the same thing when we use social media. Asking teenagers to completely give up social media is not realistic, nor is it an effective strategy to combat cyber bullying. Take drug abuse, for example. Adults don’t just tell kids, “Drugs are bad, don’t do them.” Adults know they have to explain the negative consequences, physically and emotionally, in order to get the message across. Advocates against drug abuse also provide more practical solutions, such as how to say no.

Why don’t we do the same for cyberbullying?

To stop cyberbullying, there are certain things to teach children and teenagers. Instead of banning social media in every form, adults can advocate the safe use of websites. Many adults plug horror stories into the minds of children about strangers on the Internet- and while that may create some fear, what are children supposed to do with this information? At this point in society, teaching children to avoid all forms of social activity online can breed dangerous social behaviors.

Telling teenagers and children the dangerous consequences of talking to strangers online, posting certain photos or harassing people can raise awareness and compassion in social media users while still allowing them to use it. Communicating on the Internet can be a bad thing, but it can be a great way to meet new people and reach out to someone if it’s done safely.

Like every aspect of life, there are multiple sides to everything. We know all the negative things about social media. Some advice from the Representative from the Attorney General’s Office is, “Be mindful of how you’re represented and not give into the pressures of posting things. Use technology in a positive way.” So what are the positives?

There are many positive to social media. For example, teenagers who aren’t feeling well emotionally can go to YouTube and Vine to cheer themselves up by watching something funny. By being connected to videos from other people, teens can gain a sense of unity and comfort.

In many cases, social media can improve self esteem. With social media, you get to chose your icon, bio, header and background colors. It gives people a sense of choice and the opportunity to express themselves. Many people have expressed their sexualities and gender issues through websites like Tumblr and have used social media to show what they love about themselves. Adults find teens taking selfies as “vapid” but selfies are a way for us to preserve memories and see beautiful features within ourselves. Many times, when teens post selfies, they get positive feedback about themselves and slowly, through the social media movement, teens are learning to value themselves.

Social media can be used to publish writing- giving our generation a new voice that no one has had before. It can also be used to show artwork created by young adults. Social media creates a new platform for up and coming artists- artists can sell work online, post videos of their talents to get recognition, and even create their own businesses through the Internet.

Finally, our generation is more connected than ever to people we admire- teens can reach out to celebrities to try and get noticed. This brings happiness to many teenagers and even bring them closer to other people who share common interests.

Technology is empowering because it is ours and we get to make decisions on how to use it. Of course, using technology to bully others is not the right way to use it- but to make generalizations about our youth is to diminish the great things technology has brought us ignores key points of history and the patterns we face in society. Yes, cyberbullying is an issue we need to address, but to make wars against social media itself is to ignore the actual problem.

There is no easy way to “fix” cyber bullying. But raising awareness of the consequences and explaining what could happen if people continue to do it is a start. “We can’t give details [of the consequences] or it’d be too horrifying. It has to be politically correct,” says Sgt. Kim.

We know cyberbullying is bad. And trust us, we’re trying to stop it too. For instance, certain blogs on Tumblr (a social media website) are dedicated to sharing positivity and spreading happy thoughts. Tumblr user sheisrecovering shares important links to help with anxiety and depression, and tells many users that they are loveable and amazing.

Selfie movements across Twitter and Snapchat share the same message. Young adults post selfies because they feel they are beautiful and want to share it- adults mistake this as vapidity and call it unsafe without really understanding the motivation for most teens.

Bullying, in all it’s forms, is a terrible problem- a problem that people of every age should make an effort to combat. It isn’t just a fight for teenagers- everyone has a role to play. Understanding social media is just one step towards creating a more positive world.

Here are resources for dealing with cyberbullying and spreading positivity online. The links help victims and give them support.

Here are some hotlines for suicide and cyberbullying on both the national and international level. Call the hotlines in your respective area if you need support or click on the websites for more information.