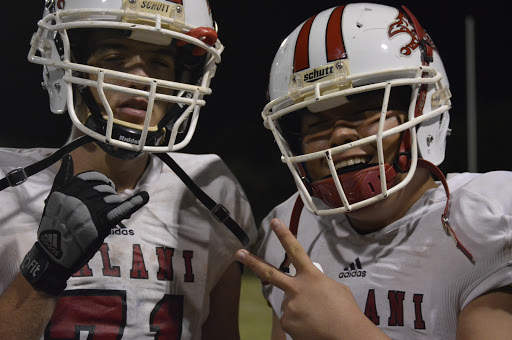 The Kalani Falcons secured another win on Friday against the Mustangs of Kalaheo. Kalani now improves to a record of 3-2, hoping to move into the DII playoffs at the end of the regular season.

Early in the first quarter, defensive back Kohl Suehiro intercepted a pass from Kalaheo and ran it in for a touchdown, putting the Falcons up 7-0. However, the Mustangs came back with a touchdown of their own, leaving the game tied at the end of the first.

In the second, quarterback Seth Tina-Soberano threw a three-yard touchdown pass, putting the Falcons up 14-7. Ten minutes later, the Falcons complete a 45-yard run to put them up 21-7.

To top it all off, Ikaika Holden completed a 12-yard run in the fourth to put Kalani up 28-7, cinching the win for the Falcons.

With a record of 3-2, Kalani is tied with Waialua for the fourth spot in the OIA DII rankings. Pearl City, Waipahu, Kaimuki, Waialua and Kalani are all fighting to make playoffs, which is still up in the air at the moment. If each team beats two of the five teams mentioned above, a coin flip will determine which four teams make it into the playoffs. Now, these five teams are hoping to improve their records as much as possible to hopefully qualify for playoffs.

“This is a great opportunity to be in this situation- we just have to take it one game at a time,” says Coach Melemai.