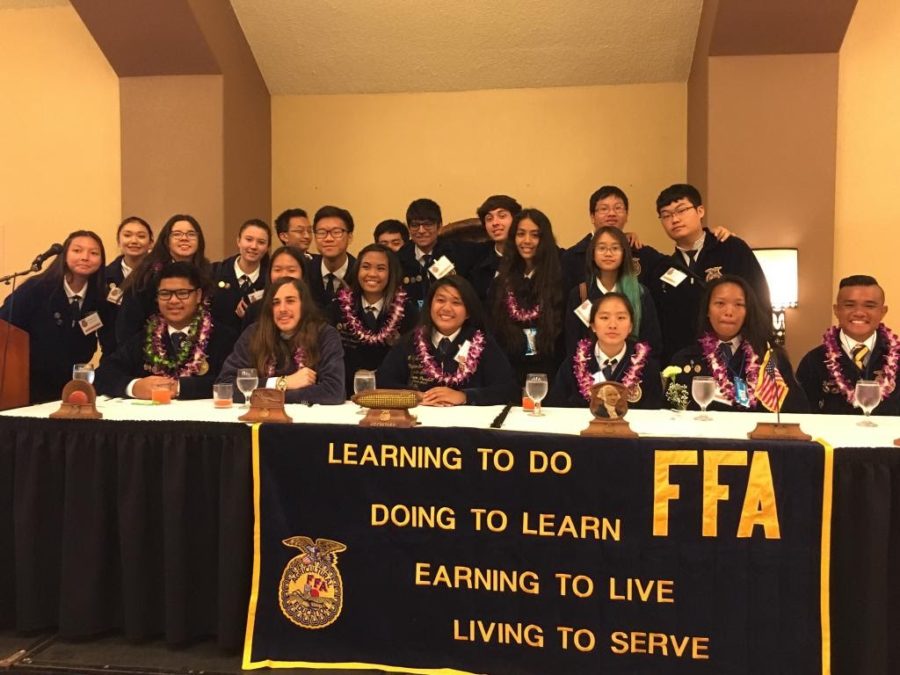 The FFA club traveled to their State Conference in Kauai during the last few days of March. There they had other schools from around the islands compete in the different competitions that they had qualified for at the state level.

Our Kalani Chapter spent bits and pieces of their time going around the island and sightseeing everything that Kauai had to offer. They tried some of the local food which wasn’t much different than here in Oahu and saw that most of the buildings in Kauai weren’t even over five stories tall.

The competitions began on the first day during the afternoon and lasted until night. The FFA members were introduced to the Southern Region Vice President, DeShawn Blanding, and he broke the ice among all the chapters. Some icebreakers were played and the night was over with a notice for volunteering in the morning.

Our FFA members volunteered to study how fertilizer would affect weed growth at Kauai Community College and made a pretty nice FFA sign with a drone. FFA chapters came back after a couple of hours to finish the rest of the competitions that were taking place at KCC. The night ended with bowling with all of the FFA chapters generously provided by the Hawaii State FFA.

The last day was spent as a banquet day where awards were distributed and the new Hawaii State Officers were named. The mayor gave a speech to the schools that attended showing us that change is possible and that we must always care for the environment. The Southern Region Vice President DeShawn Blanding gave his speech about how we should always keep calm under any situation and that we have to take control of everything in our life sometimes.
Congratulations to Sage Enomoto for winning Second place in Prepared Public Speaking and our Parliamentary Procedure team for winning Third place! This unfortunately did not qualify any of them for the national level but congratulations to the schools going to the 2017 National FFA Convention in Indianapolis. Also, congratulations Angela Li for winning Hawaii State Treasurer and Oahu Island Vice President for 2017-2018!