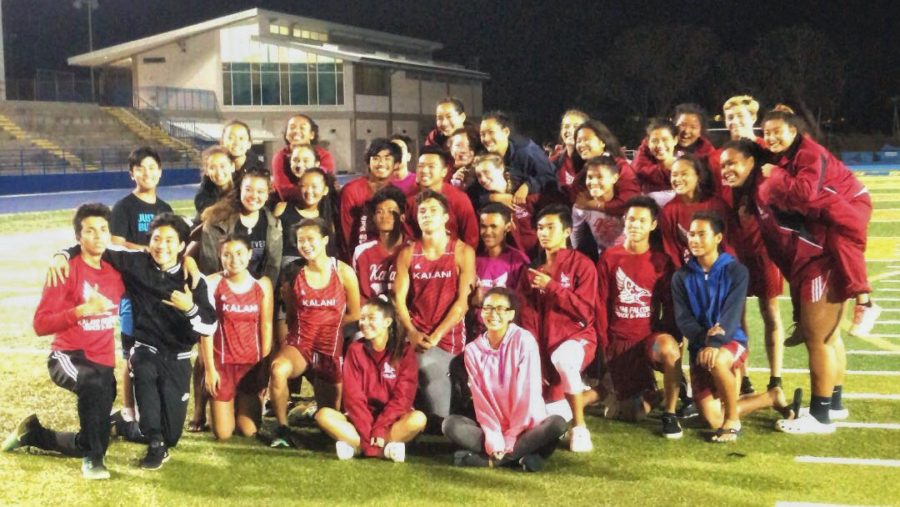 Kalani Varsity Boys and Girls Track and Field are OIA Eastern Champions for the first time in the school's history.

Azure Chung won the 100-meter dash and the long jump, earned second in the 200-meter dash, was on the winning 4×100 team and anchored the 4×400 team to a meet-defining 4th place finish. She earned a collective 32 points for the Girls Varsity team in their 111 to 109 victory over Kaiser High School.

“It was an honor to compete against people who were also very talented in track because we make each other better,” Azure Chung said.

At the end of the meet, the Girls’ championship came down to the 4×400 relay. Kaiser High School had 100 points going into the last event: their 4×400 team was slated to easily win and earn 10 additional points for the school. Kalani was leading the meet with 108 points and their 4×400 team was seeded 5th. Runners Sheree Tam, Jenna Tsuzaki, Julia Tsuzaki and Azure Chung needed to get fourth place or higher to win the meet for Kalani.

When anchor Chung took the baton, the Kalani Girls 4×400 team was in the fifth position, 40 feet behind the fourth-place team from Roosevelt High School. Chung slowly reeled in the Roosevelt runner over 300 meters. With 100 meters left, she bared down against a relentless wind, pumped her arms, and edged out Roosevelt to finish fourth. People in the stands were cheering so loudly you’d have thought Kalani finished first.

“When you hear everybody yelling at you, you realize what you’re doing it for,” Chung said. “I heard everybody cheering for me and I realized it’s not just about me. It’s about me doing it for my team.”

Chung PR’d and qualified for States in the 200 and looks forward to the next four weeks of championship meets. At the State Championship track meet on May 11 at Kamehameha Kapalama, she will be competing in the 100, 200, 4×100 and Long Jump. The Girls 4×400 team has yet to qualify for States.

“My goal is to PR in everything. I already know that I might not be able to win everything, but there’s always self-improvement,” Chung said.

On the boys’ side, senior Travis Tagad won the 100-meter dash and the Triple Jump, earned third in the Long Jump, fourth in the 200-meter dash, and helped the Kalani 4×100 and 4×400 teams place first and second respectively. He contributed a whopping 42 points for the team’s 103.5 to 86.5 victory over Kaiser High School’s second-place finish.

Last year Tagad played baseball for Kalani and switched to track this year at the urgings of his friends and teammates, Ross Yamane and Logan Matsuoka. Tagad didn’t expect to do so well but he has been dominant in his first track season for Kalani.

“My goal was to run below 11 seconds,” he said, of his performance this past weekend in the 100.

He met it, running 10.98. He has the third fastest time in the state this year.

“I just wanted to score as much points as I could for the team,” Yamane said. “And I try to PR every week.”

Yamane ran 11.12 in the 100 and qualified for States, an honor that has eluded him for the past two years. When he saw his official time, he said he ran around the house, yelling. Yamane’s father ran the 100, 200 and 400 for Kaimuki High School as a teenager and Ross’ time meant he had bested his father’s 100-meter personal record.