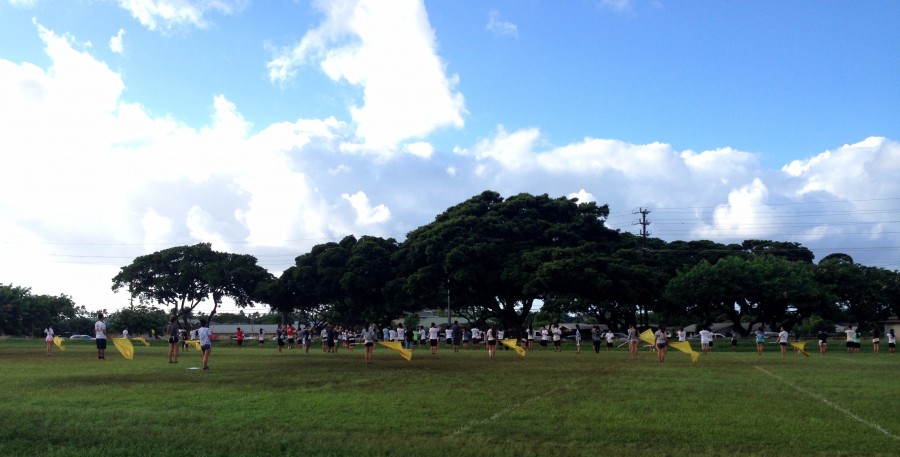 Kalani High School’s marching band has consistently represented the Falcons through many years. They work hard to play for many Kalani events, such as all of the Kalani football games, the school assemblies and the pep rally for homecoming. They also compete in many festivals and march for other statewide events such as parades. Marching band begins their practice before the school year starts, in July. The sections in marching band includes megaphone, trumpets, clarinets, flutes, percussion/pit, trombones, baritones, sousaphones, tubas, saxophones and color guard. Marching band is only available for students who are enrolled in a music class.

Raquel Hernandez, a sophomore french horn player, has been in marching band since her freshman year. When asked what she enjoys about marching band, she said, “I like how my friends are in it and we come together to march. We have a lot of teamwork.” Raquel and her teammates work hard every week to continue building on their craft. She said people should join because, “It’s a good experience to make new friends. It gives you a really rewarding feeling, and when you finish you know the end result is with people you’ve made close bonds with.”

Another member of Kalani’s marching band is Kanehe Nishimura, a senior in color guard. He is sad that it is his last year participating, and he wishes he could continue doing it. He had many great memories from marching band, but his favorite memory would have to be his first performance. “I enjoy doing marching band because it’s fun, and I like to hear the music playing as I perform,” Kanehe said. “As a senior, my favorite part about being in marching band is the performances.” This is expected, as Kanehe said he doesn’t get nervous when he performs. When asked about possibly having a marching band career in college, he said, “I’m not sure if the colleges I’m applying to have marching band, but if they do I will definitely try.” Finally, he gave some advice for anyone thinking about joining marching band: “Wear sunscreen, bring sunglasses, and drink plenty of water.”

Lastly, Joshua Ho’opai is a senior french horn player, who says that he is the tallest member in marching band, by far. Like the others, he enjoys marching band because, “I have a fun time with my friends, and it’s a good experience.” After he graduates, he will miss the bus rides with his team the most. “It feels good that it’s my last year at Kalani, but it also makes me pretty sad too.” Josh said. His final advice for anyone thinking about joining marching band is: “Stock up on that sunscreen, man, and be ready for wicked tan lines.”