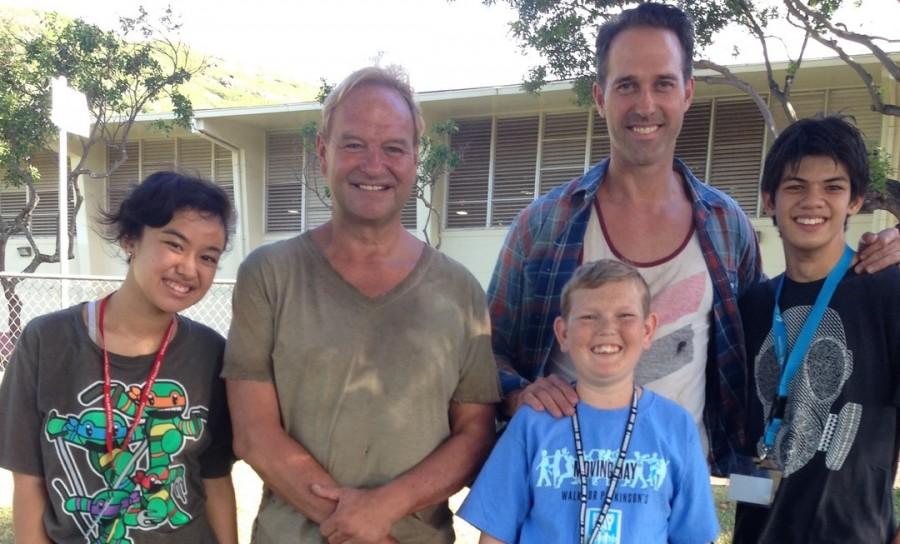 On October 19th, 2015, crews from the cast of Hawaii Five-0 came to Kalani High School to film a football scene on Kalani’s field. We were able to interview two of the show’s extras about their experience on the show.

Dave is an extra for Alex O’Loughlin, who plays Steve McGarrett. Dave says that being on the show is a great job, and a once in a lifetime opportunity. “It’s tiring, but it’s exhilarating and fun. We have very long hours, from 3:00 AM to 10:00 PM.” Dave loves being able to go and see places that he would’ve never been able to go before. “I’ve done some movies, been on a soap opera and a commercial. I’ve been all over the place.”

We also spoke to another extra on the show named Ryan. Ryan personally likes to see the director work, and see the director be creative. “The directors and producers really pay attention to detail. If there is someone playing frisbee in the background, those are real frisbee players. The producers know that the audience pays attention to the background and foreground.” He also has experience with the actors themselves. “Alex [O’Loughlin] starts speaking in his thick Australian accent as soon as the director says cut. He’s very much in focus.”

It takes approximately 8 days of shooting for one episode. The cast has a $5 million dollar budget for each episode. Regarding the shoot, Ryan says,“The director films each scene 6 or 7 different times to get different angles and lighting. It also takes hours to set up a shot, which leads to a lot of sitting around and waiting for the cast members.”

Coach Racer, a substitute teacher and the wrestling coach at Kalani High School, has also been on Five-0 as a stunt man. He got the job by finding out who the stunt coordinator was and by giving him his headshot. “It’s super fun to do stunts, but it’s kinda boring to be an extra,” he said. “I do stunts- I wouldn’t consider myself an actor. There’s not a lot of opportunity to act in Hawaii, and it’s hard to make a full time career out of acting here.”

Coach Racer’s character died twice on the show. The first time, they didn’t show him getting shot. Instead, they used a fake gun that sounded real, and Racer had to react as if he had been hit by a bullet. The second time, they put a blood pack on the inside of his shirt, and a worker on the show (called a ‘squib’) pressed a button to make the blood pack explode.

Coach Racer gave some advice to those interested in being an extra or stuntman. “If you want to be an extra, go to the big casting calls. To do stunts, you have to find out who the stunt coordinator is and get in touch with him. You can also hustle, which means to go to the set and try to meet the stunt coordinator yourself. If you want to get into acting, you need to find an agent.”

Coach Racer has had experience with stunts growing up. His dad was a stunt man, and he taught him a few things like how to fall correctly. “I was also very athletic- I played almost all sports. The most important thing is knowing how to react to different situations- and how to land and protect yourself.”

Hawaii Five-0 is a very popular show amongst locals and everyone else in the world as well. Plenty of work and time goes into making an episode- a lot of work that often goes unnoticed. Whether it’s a stunt man or an extra, the cast of Hawaii Five-0 works hard to get everything done.