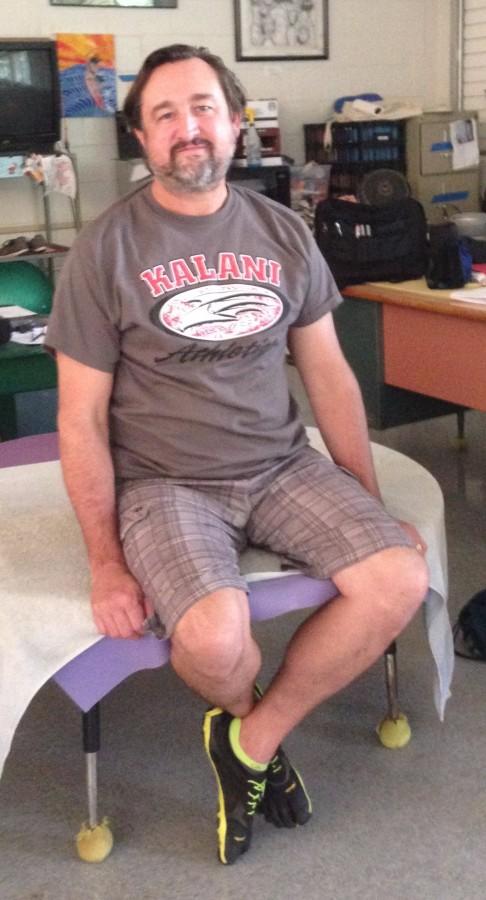 In 2012, Mr.Kendrick was awarded the Class of 2012 Appreciation Award, which stays in his classroom today. Receiving this award signifies how much of an impact Mr.Kendrick has had on his students throughout the years. Mr.Kendrick is an English teacher, which he chose to teach after he majored in it. “I always enjoyed reading and writing, and out of all the disciples, writing is the most important thing kids can learn in order to be successful. If you can’t write well, all the doors close on you.”

Mr.Kendrick actually graduated from Kalani after moving to Hawaii from New York when he was 12 years old. When asked if he got in trouble a lot as a teenager, he said, “No, but I should have. I surfed every day of my junior year. I only went to the first and last class of the day.” Mr.Kendrick also had a full time job since his sophomore year of high school. Besides doing all of these things, he also ran cross country and was the judo captain. As advice to those in high school right now, he said, “Take advantage of all the opportunities in that you have in high school, like sports and clubs. As you get older, those things dry up, and there’s never gonna be a whole bunch of people who wanna play sports together unless it’s professional.”

After high school, Mr.Kendrick attended University of Hawaii at Manoa for his bachelors and masters. He graduated with honors from college. “Growing up, I wish I had known that you’re gonna work until you die, so you should take some time off to have some fun. If I could go back to college, I wouldn’t have worked as much as I did. I worked full time and went to school full time, and I also had my own apartment and car. I probably didn’t need to work as much as I did because it didn’t leave any time for the fun stuff in college.”

Finally, Mr.Kendrick returned to Kalani to teach English after college. He always wanted to be a teacher, jokingly citing “brain damage in early age” as one of the reasons. “The hardest part of my job is managing expectations. There’s only so much that I can do with the limited resources I have.” But there’s also good parts of his job, like, “The kids. I like watching them grow and get smarter every year.” Mr.Kendrick still has some goals in his career, like introducing the AP Capstone program at Kalani. “I think we can do a lot more for the kids,” Mr.Kendrick said.

Being a teacher isn’t the only thing Mr.Kendrick is proud about either. He’s proud of the fact that he owns a house on a teacher’s salary. Being a lover of books, his favorite book would have to be The Hitchhiker’s Guide to the Galaxy. Throughout his life, some of the people who have had the biggest impact on him have been his dad and a former teacher at Kalani, Mr.Doran.